HP quietly launched a new 2-in-1 tablet with an 11.6 inch display, an Intel Pentium Bay Trail processor. It’s called the HP Pavilion x2 11t, and it’s basically a portable tablet that you can use as a notebook thanks to the included keyboard dock.

It’s a bit smaller and less powerful than some of the other members of the HP X2 2-in-1 family, but that’s not necessarily a bad thing because it’s also easier to hold as as tablet and cheaper than many similar devices, with a starting price of $600. 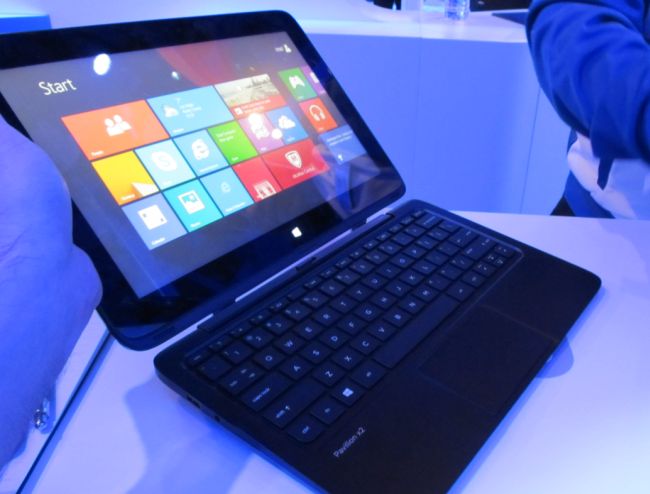 The Intel Pentium N3510 processor is based on the same Bay Trail architecture as the Atom chips found in tablets such as the Asus Transformer Book T100 and entry-level Dell Venue 11 Pro. But it’s a higher-performance chip that consumes a bit more power.

I got to play with a Pavilion x2 recently and while I didn’t have time to run any serious performance tests, based on the amount of time it takes to boot and load programs, it seems like pretty much what it is… something that bridges the gap between a device with an Atom and a Haswell processor. If you’re looking for a high-performance tablet, you’re probably better off getting one with an Intel Core chip, but the Pentium and Celeron Bay Trail family offers an alternative for folks looking for lower-cost devices.

The Pavilion x2 11T is covered in shiny plastic. It’s comfortable to hold, but the more you hold it the more likely you are to leave fingerprints all over the back of the tablet.

The tablet itself weighs 1.7 pounds. With the keyboard dock the whole system weighs 3.3 pounds and measures about 0.9 inches thick. The system has 4GB of RAM, at least 64GB of storage, USB 2.0 and USB 3.0 ports and HDMI output.

Unlike many devices on display at CES 2014, the Pavilion x2 11T is already available for purchase.