Chinese device maker GPD kicked off the recent mini laptop craze by launching the GPD Win handheld gaming PC and GPD Pocket mini laptop. This summer the company introduced an updated Pocket with an improved keyboard and a faster processor… along with a higher price tag.

Folks who pre-ordered during a crowdfunding campaign were able to pick up a GPD Pocket 2 for $529, but after that the price went up to $720 or so  (although some stores are selling it for a little less).

Now there’s a more affordable version of the GPD Pocket 2. If you’re willing to trade a little performance for longer battery life and a lower price tag, you can pre-order the new configuration for $435 and up during a crowdfunding campaign and the tiny laptop should ship in January. 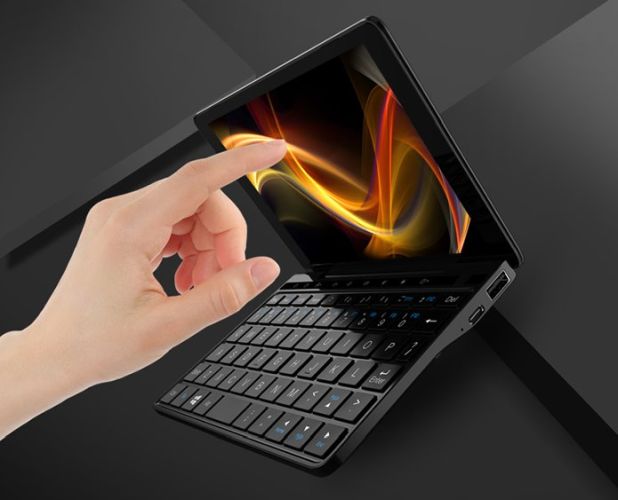 After the campaign ends, the estimated price for the cheaper GPD Pocket 2 will be about $550.

So what corners did GPD cut to slash the price by more than $150? The new configuration has half as much RAM and a less powerful processor. On the bright side, GPD expects the new model to get up to two hours of additional battery life, and it comes with a black chassis instead of silver.

The little laptop has a QWERTY keyboard, but the keys are a bit on the small side. Touch-typing is certainly possible, but it takes a little while to get used to the keyboard. That said, the Pocket 2 probably has the best, most comfortable keyboard layout of any mini laptop I’ve tested in the past year or two.

When GPD was planning the Pocket 2, the company had originally decided to omit any sort of touchpad or touch sensor. But responding to feedback from potential customers, GPD added a tiny optical touch sensor to the upper right corner of the keyboard and left/right click buttons to the left. It’s not the most intuitive way to move a mouse cursor, but it gets the job done in a pinch if you’d prefer not to use the touchscreen or connect a mouse.

The GPD Pocket 2 model I tested earlier this year was powered by an Intel Core m3-7Y30 processor, but GPD recently started selling the Pocket 2 with a newer Core m3-8100Y processor due to limited supply of the former chip.

For many day-to-day tasks, it’s likely that you’ll see similar performance. But the more expensive Pocket 2 models will probably score higher in benchmarks and handle better when running more resource-intensive tasks. The additional RAM will also probably come in handy for multi-taskers.

Since the RAM is not upgradable in these little laptops, you should probably only buy the cheaper version if you’re pretty sure you won’t need more than 4GB. That should be plenty for running Windows 10, a web browser, some multimedia apps, and even some games. But if you plan to do a lot of multitasking or media editing (why would you do that on such a tiny machine?) then it’s probably worth splurging on the higher-priced model… or another mini-laptop with similar specs.

Still, it’s nice to have the option of picking up a more affordable mini laptop. The $435 pre-order price really seems much more appealing for a computer that’s likely to be used as a secondary device rather than as a primary PC.