Google is introducing two new smartphone apps designed to help folks who are deaf or hard of hearing. One is the previously-announced Sound Amplifier app for Android phones, which is available starting today. It lets you put on smartphone headphones to reduce background noise, amplify quiet sounds, and leave loud noises alone.

The other is a new app called Live Transcribe which uses speech-to-text technology to display captions on a smartphone display in near real-time.

Live Transcribe is rolling out in a limited beta starting today, and both apps will be available pre-installed on Pixel 3 smartphones. 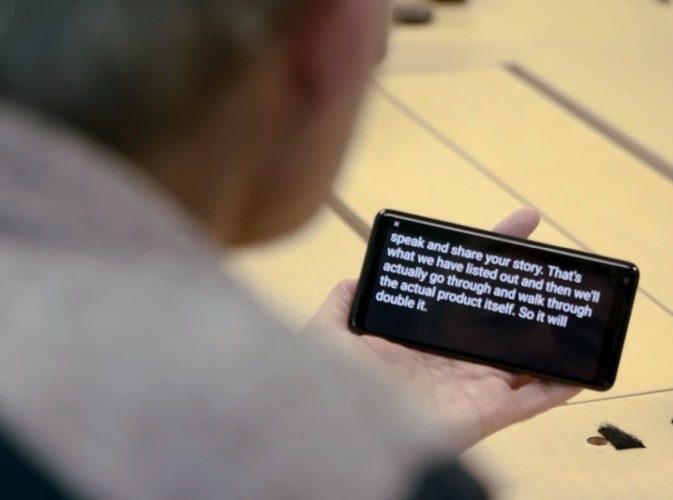 Google has been in the speech-to-text business for years. Google Voice provides automatic transcripts of voicemail messages, and while the results are imperfect, they’ve gotten better over time thanks to machine learning. The same goes for the support for voice commands for Android devices, which eventually led to the creation of Google Assistant, which allows users to interact with a wide range of devices using voice.

Live Transcribe leverages the company’s existing technology so that all you need is a smartphone with a microphone and a screen to display closed captioning for real-time conversations without the need for a person to be typing away a transcript.

As someone who’s spent a lot of time typing up transcripts of interviews for podcasts and radio stories over the years, I can certainly see how this technology could have applications beyond providing a new way for deaf and hard of hearing people to communicate — although I’m not sure if Google has any plans to let users export a transcript (and there are already existing services that provide automated transcriptions of spoken word audio).

But Google is positioning Live Transcribe as an accessibility service, and for good reason — there are hundreds of millions of people affected by hearing loss and I suspect many of them could take advantage of a tool like this.

Once you’ve installed Live Transcribe on a smartphone, you can use it by enabling it in Accessibility Settings, and then opening the app from the accessibility button in the navigation bar.

The app should be able to recognize “over 70 languages and dialects,” and in addition to providing captions for spoken words, it allows participants in a conversation to type responses with a keyboard. There’s also support for external microphones for improved accuracy.