Google may be preparing to launch a new online note-taking service called Google Keep. Android Police noticed that it went live briefly yesterday, but the Google Keep website is no longer active.

Overall it looks like a decent tool for jotting notes and saving and organizing them online so you can access them from any web browser or mobile device. But despite the permanent-sounding name “Google Keep,” I have to wonder whether it’s a good idea to start relying on a new Google product of this type. 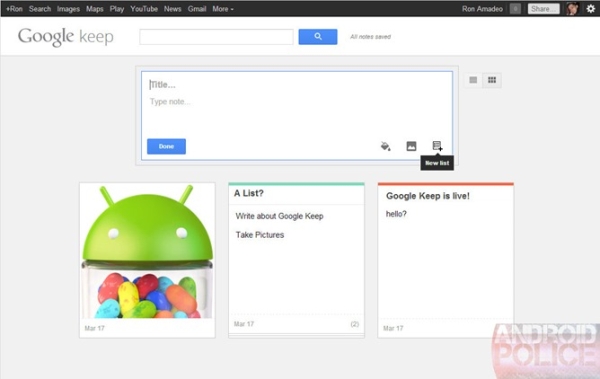 Google recently caused a bit of a fuss by announcing plans to shutter Google Reader, its online RSS reader which has been in operation since 2005. While the company says it’s closing Reader because there aren’t enough users to justify keeping it open, there are at least a few hundred thousand loyal users, many of whom have signed petitions asking Google to keep Reader alive, and even more who have already made the move to alternative services.

Fortunately it’s not that hard to move your data from Google Reader to another RSS reader: just export an OPML file and import it into the RSS reader of your choice.

But Reader isn’t the only service Google has shuttered. A few years ago the company also killed Google Notebook –– a service designed to let you jot down notes and store them online where they were accessible across devices. Sound familiar?

And that’s just the tip of the iceberg. Slate has put together a Google Graveyard showing some of the many services Google decided to launch (or acquire) and then pull the plug on including Google Wave, iGoogle, Google Health, Google Desktop, Picnik, Google Listen, Knol and Jaiku, just to name a few.

Over the past decade Google has become much more than a search engine. The company regularly launches new products and services that are experiments which may only be tangentially related to the company’s core businesses. Some of them, like Gmail and Calendar become essential to millions of users and help generate revenue by keeping people constantly logged into their Google accounts (which helps Google serve ads even if you don’t see ads directly in Calendar or some other web apps).

So if and when Google officially launches Google Keep, it’s anyone’s guess how long it’ll stick around. While the company has been pretty good about letting users export data from existing and dying apps through the Google Takeout site lately, it’s still a pain in the behind to have to migrate your data because you had been using a convenient service which is no longer around.

Sure, there’s no guarantee that Evernote, OneNote, or other cloud-based note apps will be around in 5 years either. But given Google’s recent track record I’d be a especially wary of starting to rely on a service like Google Keep.

17 replies on “Google Keep: If Google launches a note-taking service, would you trust it to stick around?”