Want a smartphone that offers long battery life? Your best option today is usually to find a model with the biggest possible battery (and/or the most efficient hardware). But Chinese phone maker Gionee is taking a slightly different approach.

The company’s upcoming Gionee M5 smartphone doesn’t just have a  big battery. It has two batteries. 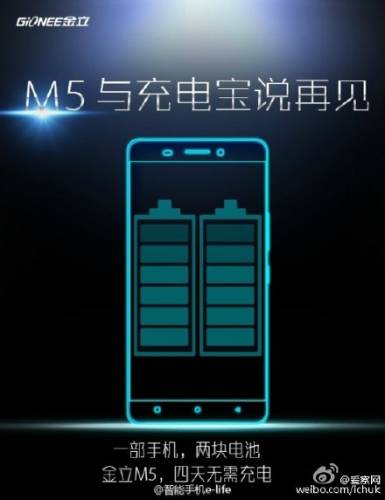 Gionee isn’t telling us much about the phone’s other features yet, and it’s not even clear how much capacity each of those batteries has. But the company says the phone should be able to last for up to 4 days on a charge. And if you wan to go even longer between charges, you can just take a spare battery or two with you: the batteries are hot swappable.

That means you can take out one battery and replace it without even shutting off the phone, as long as the other battery is still installed.

Giaonee’s phones aren’t widely available outside of China. But if the dual battery concept proves popular in China, maybe other smartphone makers will borrow the idea. Or maybe they’ll go in the other direction and stop offering the option to replace your smartphone battery.

via GizmoChina and Weibo