Gigabyte is launching a new tablet with a 10 inch display, an Intel Celeron processor, and Windows 8 software. It’s called the Gigabyte S1082, and if it looks familiar, that’s because it bears a more than passing-resemblance to the Gigabyte S1081 Windows 7 tablet.

But the new model has a higher resolution display, a faster CPU, and Microsoft’s latest operating system. The Gigabyte S1082 should be available soon after Windows 8 launches on October 26th. 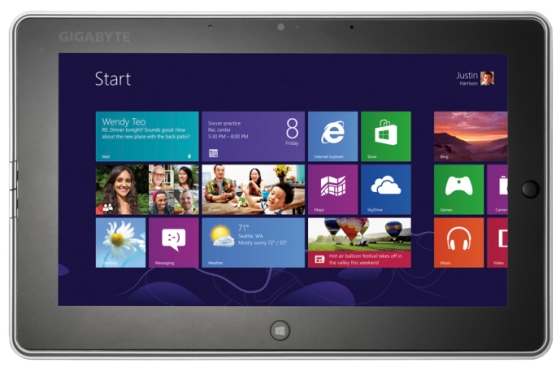 It supports 802.11n WiFi, Bluetooth 4.0, and there’s an option for mobile broadband as well.

Gigabyte will offer the tablet with between 2GB and 8GB of storage, and a choice of a hard drive (up to 500GB) or solid state disk (up to 256GB). With an SSD, the tablet weighs 1.75 pounds. Hard drives are a little heavier, bringing the total weight to 1.87 pounds.

The company will also offer an optional docking station with additional ports, a DVD drive,  stereo speakers, and a subwoofer.

CNET reports the tablet will have a starting price somewhere between $599 and $799.