But the good news is that Planet Computer plans to offer tools that will make it easy for users to load their preferred Linux distribution to run alongside Android. 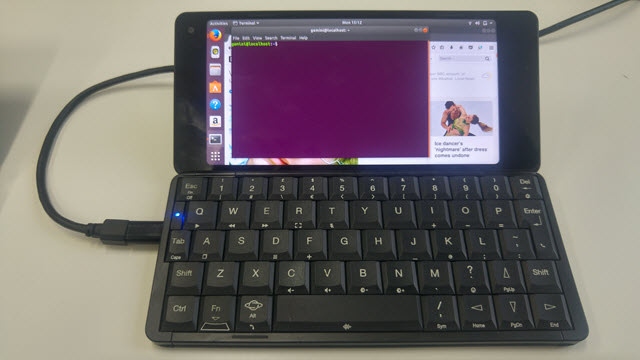 Planet Computer says there’s still some work to be done on Linux drivers, keyboard layout support, and performance issues. But the company says basic functionality and features including 4G connectivity are already working.

Users that want to install Linux will be able to download a Gemini Flashing Tool from the Planet Computer support site. It’ll run on Windows, Mac, or Linux PCs. It’ll take you through the steps of partitioning the storage space on your Gemini PDA and loading Linux so that it runs alongside Android. You can also use it to remove Linux or flash custom Android ROMs.

Its key feature may be the keyboard, which was designed by Martin Riddiford, who’s also responsible for the design of the keyboards on several classic handheld PDAs from Psion.

It’s designed to be compact, but comfortable for touch typing… something that’s not exactly true for the last 6 inch clamshell-style PC I had a chance to test.

I got a chance to check out a Gemini PDA prototype at CES last month, and I was pretty impressed with the keyboard at the time.

Hands-on with the Gemini PDA handheld PC with Android, Linux and a 6 inch display

18 replies on “Gemini PDA will ship with Android, but it also supports Debian, Ubuntu, Sailfish, and Postmarket OS (crowdfunding, work in progress)”