Samsung sold more smartphones in the third quarter of 2016 than any other company, according to a new report from Gartner. But that doesn’t mean it was a good quarter for Samsung: sales to consumers were down more than 14 percent from the same period in 2015. 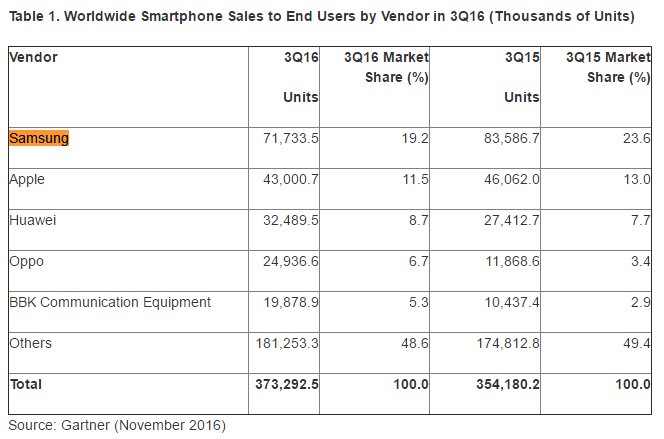 One obvious reason for the decline? Samsung’s Galaxy Note 7 launch was a pretty big failure. While the phone received strong reviews at first, a number of reports started coming in that phones were spontaneously catching fire.

Before you start feeling too sorry for Samsung, Gartner’s report suggests the company still has a 19.2 percent share of the smartphone market and sold nearly 72 million phones in the third quarter.

That’s almost as much as the number two and three companies (Apple and Huawei) combined.

But it’s also interesting to note that Gartner also sees increasing competition from Chinese smartphone makers: three of the top five vendors in the third quarter were Huawei, Oppo, and BBK, and they all saw growth in sales and market share, while Samsung and Apple saw declines.