The Clockwork GameShell is a modular, hackable handheld game console that runs open source software and comes as a DIY kit, with some assembly required. When fully assembled, you can use it as a handheld gaming device capable of running classic console games or indie titles. But first you need to assemble it.

Last year the folks at Clockwork launched a crowdfunding campaign to raise money to produce the GameShell. After I wrote about the project, the developers reached out and offered to send me a demo unit once it was available.

The GameShell started shipping to backers of the crowdfunding campaign this summer, and this week I took some time to put my review unit together. Despite a (heavily edited) demo video showing the process taking about 3 minutes, it took me closer to 30. While you don’t need a soldering iron, screwdriver, or any other tools, there is quite a bit of work that goes into assembling the GameShell from the parts that ship in the box. 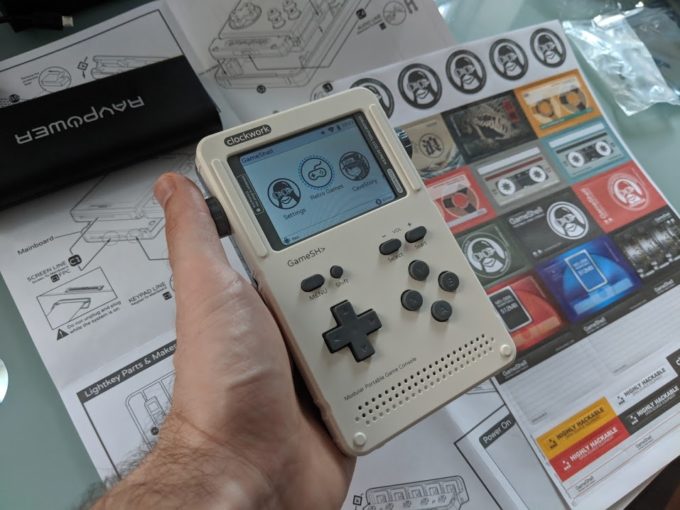 I’d recommend checking out the shorter video if you just want to see how everything fits together. But if you’ve got a lot of free time on your hands, you can find a lengthy video at the bottom of this post showing the entire process from start to finish. Or just skip to the 35 minute mark for a first look at the ClockWork GameShell operating system and a couple of games.

The GameShell features a 1 GHz Allwinner R16 ARM Cortex-A7 quad-core processor with Mali-MP2 graphics, 512MB of RAM, 802.11b/g/n WiFi, and Bluetooth 4.0. All of that’s on the mainboard module which powers the system. There’s also a micro USB port, a headphone jack, and a microSD card slot.

Speaking of microSD cards, the GameShell ships with one that has an open source GNU/Linux-based operating system with settings, game emulators, and a few games pre-installed (Free DOOM and Cave Story). There’s also a wireless file server tool that allows you to connect to the GameShell over a WiFi network from a PC in order to transfer game ROMS to the device, making it easy to play classic NES, Game Boy Advance, or MAME titles. 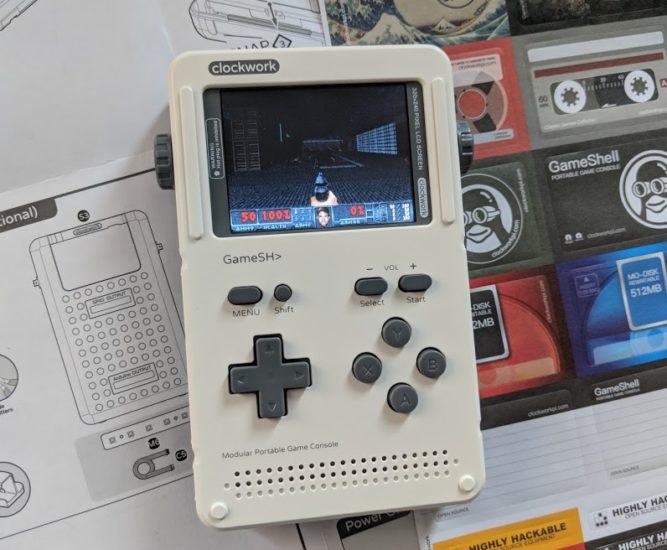 One thing to keep in mind is that you’ll want to insert the microSD card into a slot on the mainboard before putting the rest of the components together, because the card reader isn’t accessible when the GameShell is fully assembled. You can always take it apart to insert the card later, or to use a larger card or one with alternate software. But it’ll take a few minutes to open up the GameShell, insert the card, and then close it up again.

The system features a 2.7 inch, 320 x 240 pixel display, a front-facing speaker, and a game controller with X, Y, A, B, Select, Start, Menu, Shift, and D-Pad buttons. There’s also a battery module that holds a 1,050 mAH battery. And there’s a case that holds everything together.

In fact you can swap out the front panel to change the color of the GameShell. My review unit arrived with off-white, yellow, and red covers. The back cover is made from a semi-transparent gray plastic, allowing you to see the insides of the GameShell without removing the cover. 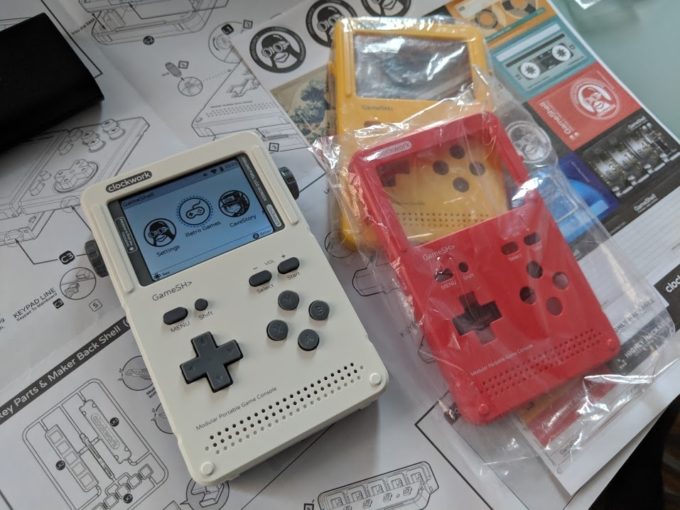 Right now that’s one of two features that truly takes advantage of the modular, DIY nature of the GameShell. The other is the back panel: there’s an optional rear cover that you can use to add a Light Bar module that puts five more buttons on the back of the device.

In the future, the modularity of the GameShell could open the door to replacing one or more components without the need to buy a whole new device. Want a higher-resolution display? Maybe Clocckwork will offer one. How about a system-on-a-module with a faster processor, more RAM, or dual-band WiFi? That could be an option too. 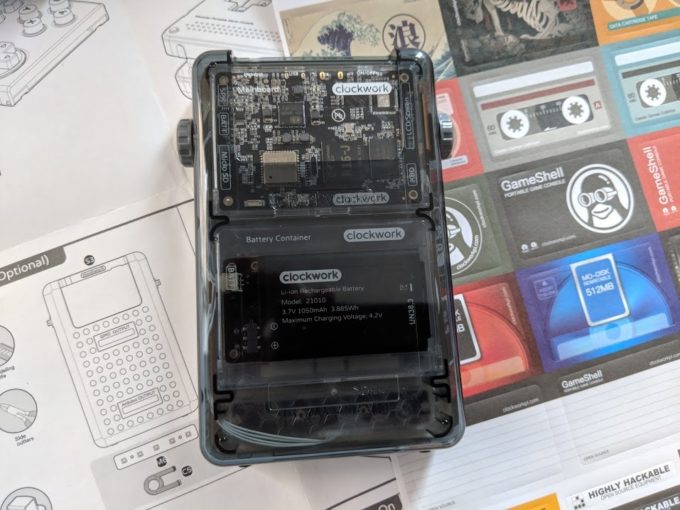 In terms of software, there’s already a reasonably active Clockwork Pi user forum where people are discussing games, emulators, and other software capable of running on the GameShell, including the PICO-8 “fantasy console” for running and developing games. There are also tutorials for modifying the operating system by altering the menus, addinng emulators, altering the game button layout, and much, much more.

I’m just getting started playing with the GameShell, but it’s a pretty nifty device… particularly for folks who are fans of retro and retro-style games.

If you missed out on a chance to order one during the company’s Kickstarter campaign, there’s currently no way to buy one. But Clockwork hopes to start taking orders soon at the full retail price of $139 and up.