The Google Chromebook Pixel is the most powerful Chrome OS laptop to hit the streets. It has an Intel Core i5 processor and 4GB of RAM. But more importantly, it has a high resolution 12.85 inch, 2560 x 1700 pixel display, which also happens to be a touchscreen.

Google designed the laptop itself and threw in premium features such as backlit keyboard, an LED on the back of the lid that glows when the device is operating, an anodized aluminum alloy case and an etched glass touchpad.

Those premium features are part of why Google is charging a MacBook-like price for the Chromebook Pixel. It sells for $1299 and up, depending on the configuration you order. That’s a lot of money for a laptop that runs an operating system designed primarily to support a web browser.

But there’s an awful lot to like about the Chromebook Pixel — and a few baffling choices.  Google sent me a demo unit to review, and I’ll have more thoughts in the coming days. But here are some initial thoughts. 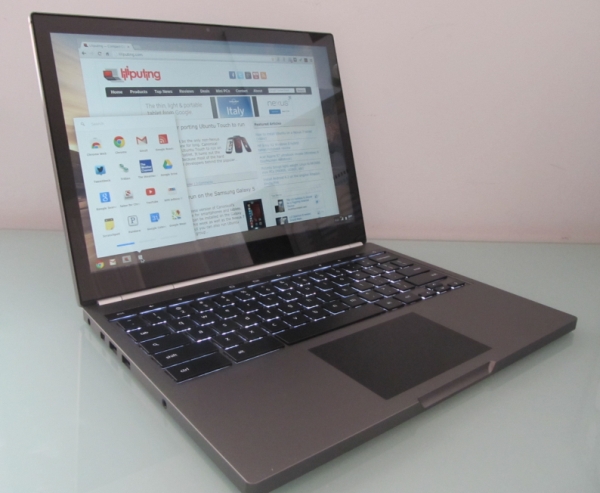 The Chromebook Pixel is the best looking and the sturdiest feeling Chromebook I’ve used to date. At 3.35 pounds, it’s a bit heavier than a model like the $249 Samsung Chromebook. But the all-aluminum and glass case looks and feels great.

With a backlit keyboard designed specifically for Chrome (there are dedicated keys above the keyboard for browser functions and other Chrome OS features), the laptop is also very easy to use for its intended purpose. 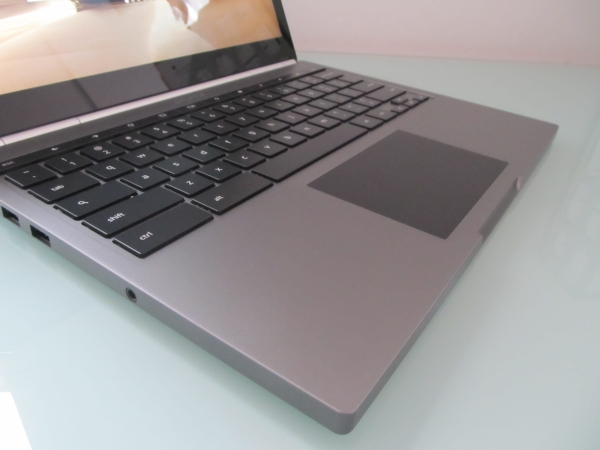 I’m not always a fan of glass touchpads, but the Chromebook Pixel’s touchpad feels smooth and responsive and doesn’t look half-bad either. It supports multi-finger gestures such as two-finger tapping and scrolling with ease.

The Chromebook Pixel feels faster than practically any other computer I’ve ever used. That’s not to say it’s got the fastest CPU or graphics processor. But those components are fast enough to handle basic tasks — and since the operating system runs primarily in RAM and saves data to a speedy 32GB or 64GB solid state disk, there’s not much to slow this computer down.

But after spending just a few moments with the Chromebook Pixel, I did find a few oddities. First, there’s more flex in the keyboard than I would have expected from a $1299 laptop. If you push down in the center of the keyboard, the enter keyboard will bow inwards a bit.

Second, the screen wobbles a bit more than I’d expect when you touch it. Since it’s a touchscreen, that means you’re likely to touch it from time to time — and it will shake a bit when you do. That can be a bit jarring when you’re watching a video or reading a website, and it can even cause problems if you’re trying to tap a specific point on the screen but you miss because the screen bends back as you tap.

This isn’t a problem that’s exclusive to the Chromebook Pixel. Many touchscreen ultrabooks with Windows 8 have the same problem, but high-end devices like the Acer Aspire S7 ultrabook don’t. Given the Chromebook Pixel’s premium case design and premium price, I’m surprised the screen wobbles at all.

It is nice to have a touchscreen though — while I was originally skeptical of the idea of sticking a touch panel in a laptop that doesn’t transform into a tablet, the more time I spend with touchscreen notebooks the more I find myself wanting to touch the screen of every computer I use. While touchscreens aren’t the best tools for entering text, touch input is ideal for launching apps, dragging and dropping, drawing, and performing many other basic tasks.

Google’s Chromebook also has an unusual aspect ratio of 3:2 instead of the more common 16:9 or even 4:3 that you find in most notebooks. Since most websites are meant to be scrolled through from top to bottom instead of left to right, Google says this layout is made for the web.

But if you’re watching a typical widescreen video from YouTube or Netflix, you’ll notice black bards above and below the screen. And if you like to view two website side-by-side, you won’t have as much space on this Chromebook as on models that cost 1/6th the price.

There’s no doubt the Google Chromebook Pixel is the most impressive Chrome OS laptop to date. But it’s a quirky device that might only appeal to folks with very specific uses in mind, (even if that use is to run Linux Mint or Ubuntu rather than Chrome OS).

You can find some more photos including some unboxing images at our Google+ page.