Mozilla is releasing the biggest update to the Firefox browser in years. Firefox 57 officially launches on November 14th, 2017 but beta versions have been available for a few months, and the stable release is already on Mozilla’s servers if you’re impatient.

The browser is getting a new user interface, but more importantly it has a bunch of new tools that Mozilla calls Quantum which make better use of multi-core processors to speed up the browser while also improving stability.

In fact, the changes are so big that Mozilla is calling the latest release Firefox 57 Quantum. 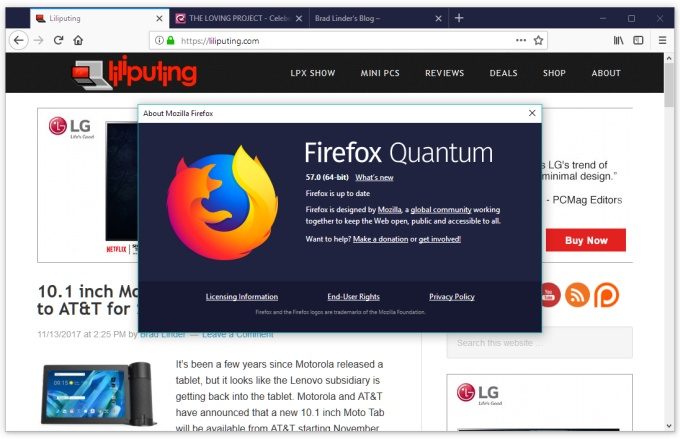 The company has been slow to fully adopt multi-process architecture. It’s something Google Chrome has had from day one, which is why Chrome has long been a faster web browser… although Chrome can also be a bit of a memory hog because of the way it assigns each browser tab its own process.

Mozilla added initial multi-process support to Firefox with the Electrolysis project that started rolling out last year. Quantum is the next step. Mozilla’s Lin Clark has a good overview of the changes in Firefox 57, but here are a few highlights:

The result is that the web browser loads more quickly, renders content more quickly, and shouldn’t crash as often. Mozilla says the browser is twice as fast as it was a year ago, while using 30 percent less memory than Google Chrome.

In the future Mozilla is hoping to improve parallel processing so that multiple CPU cores can load different content on the same page, speeding things up even further. And a new Quantum Render project is coming next year. It will be able to speed things even further by leveraging modern GPUs.

Oh, and Firefox 57 is also the first version of the browser to use the new Photon user interface that includes square tabs, a new menu design, and a combined search bar and URL bar (although you can also separate them if you prefer the old school look).

Photon is also designed to work better on displays with high pixel densities and/or computers with touchscreen displays.

On the down side, many older browser extensions no longer work with Firefox 57. Mozilla has been transitioning its plugin architecture for the past few years, but Firefox 57 is pretty much the end of the line for all legacy plugins that haven’t been converted to WebExtensions.

If you rely on extensions that use the old architecture, your best option may be to migrate them to another Firefox-compatible browser such as Pale Moon or Waterfox.

6 replies on “Firefox 57 Quantum is faster, more stable, and built for modern hardware”