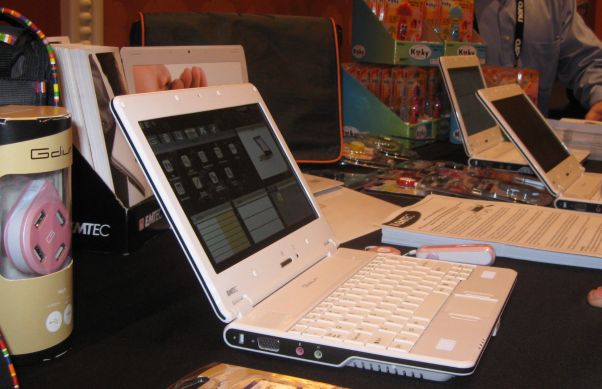 I got a chance to play with the Emtec Gdium for a few minutes last night at the ShowStoppers event in Vegas. And I have to say, it’s a nice looking little netbook with a unique design and a unique operating system. It’s launching first in Europe, and should be available in the US sometime around the second quarter of 2009.

I’ve discussed the Gdium before, but here’s a recap of the things that make this netbook unique.

I learned a few new things tonight. For example, there’s nothing particularly special about the G-key. You can install the operating system on any USB flash drive and plug it into the USB port. The G-Key is designed to fit snugly into the case so it doesn’t stick out like an off-the-shelf USB drive might. But if you already have a few USB sticks lying around and want to save a few bucks, you can use those instead of ordering additional G-Keys.

I also spoke with Bahram Nabet, one of the folks who helped design the system and asked him if the machine takes a performance hit because of the fact that the OS is running off a flash drive instead of internal memory. He said it’s hard to say, but it’s possible that the system would run about 7% faster if the OS was installed on an internal SSD or hard drive. But he says most users probably wouldn’t notice the difference, and the benefits outweigh any performance issues.

The Gdium will be available to retail customers at launch. But it’s really designed for multi-user environments, where a teacher or school could perhaps buy 10 netbooks and 50 G-keys and let students take turns on the machines. That’s something you could do with an OS installed on the hard drive, but Emtec’s solution allows each student to store their own settings and files. If you ask me, I still think this concept makes more sense for desktop PCs than netbooks, but as a colleague pointed out, the Gdium could appeal to corporations that frequently sign notebook computers out to staff as loaners. This way you wouldn’t have to ensure that each computer has the appropriate software for each user before signing out the computer, because each employee could have their own G-Key.

The internet connection last night was kind of wonky, so I wasn’t able to seee the Gdium pull in data for the user customizable widgets, and I couldn’t load any web pages. But while it seemed to take a few seconds to launch any program (even the file manager or the “about” window), once apps were up and running they seemed pretty responsive.

You can judge for yourself by checking out this short video I shoot:

I also filmed a short interview with Bahram Nabet:

Here’s the link to the One Laptop Per Hacker program Nabet mentions in the video.

And you can check out a few more images of the Gdium, Mandriva, and the G-Key in the gallery below: