The makers of the Dolphin web browser for Android have released an update bringing support for themes and wallpapers. You can customize the look and feel of the browser by choosing colors or setting a photo from your device as the background.

While that’s probably the most visible change in Dolphin 10.1, the developers have also announced partnerships with search engines around the globe. 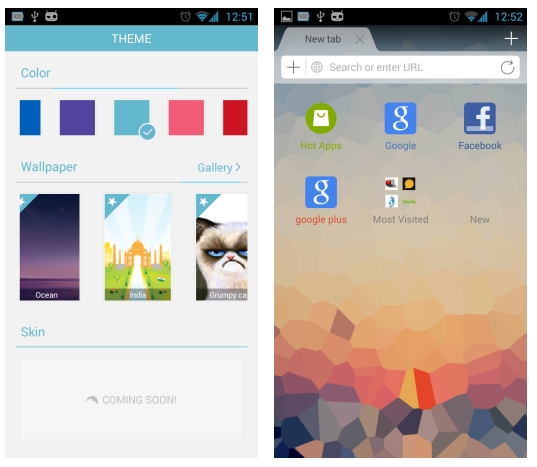 Dolphin is partnering with DuckDuckGo in the US, Baidu in China, Yahoo! in Japan, and Yandex in Russia. The idea is to customize the browser for each country, using these portals as the default search engines — although Google is still the default search provider in the US. Users can choose DuckDuckGo from a drop-down menu.

The latest version of the browser also supports 21 languages, and includes a toggle that lets you switch between desktop and mobile views with the tap of a button.

Dolphin has been around for years, and has a history of offering features before they’re available on other mobile browsers. Dolphin supported tabs long before Google’s default Android browsers did, for instance. The company’s browser also supports plugins, and gesture-based navigation.

These days those features don’t set Dolphin apart the way they one did. But the developers have been trying to keep things fresh not only with international localization, but also an emphasis on design and web apps.