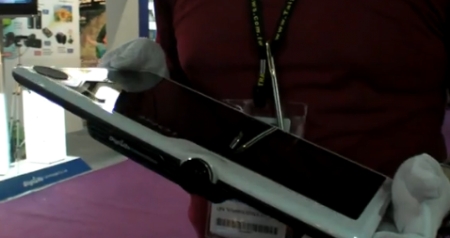 A lot of the tablets PC prototypes making the rounds today feel like netbooks with the keyboard chopped off. But the folks behind the DigiLife iOne have decided to use the extra space that afords to add something unexpected to their 10 inch tablet — a pico projector.

The DigiLife iOne is just a concept at this point, but theoretically it would have a 10 inch capacitive touchscreen display, a Samsung Cortex A8 ARM-based processor, USB and microSD ports. The tablet will run Google Android, and the company says it’s about 80% finished and should be ready to go within a month.

The idea is that you’d be able to project content onto a wall, or just about anything else using the built-in VGA projector.

I have to admit, the idea is kind of nifty — until you think about it for a moment. Are you going to hold a tablet and point it at a screen? That seems like it would just result in shaky, unwatchable video. You could put the tablet down on a table and project content onto a wall — but that would make using any touchscreen controls rather awkward.

Overall, it seems to me that it would make more sense to launch a pico projector accessory for use with tablets or netbooks rather than building one into a tablet. But with dozens of other companies launching tablets in the near future, I supposed adding a projector is one way to make your product stand out.

The company hopes to sell the DigiLife iOne for about $200 without the projector, and around $300 with the projector — although I have a suspicion that might be the price for distributors, not end users.

You can check out a video overview after the break, courtesy of ARMdevices.

5 replies on “DigiLife iOne: Would you like a pico projector with your tablet?”