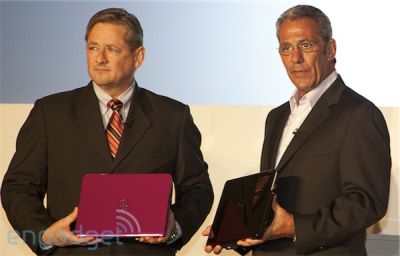 Dell’s probably almost definitely working on a mini-laptop with an 11.6 inch display. And now it looks like two Dell officials may be carrying these little laptops around with them. Engadget reports that Dell’s Phil Bryant and Michael Tatelman flashed two unnamed, undescribed, but definitively small laptops at an event in Paris today.

There’s no word on the pricing or specifications yet, but according to a roadmap leaked earlier this year, Dell’s 11.6 inch model will likely have 2GB of RAM and a 250GB hard drive. It’s not clear whether it will have an Intel Atom or Intel CULV processor.

Update 7/20/2011: This model has come and gone since the article was originally published. Dell eventually launched a product called the Dell Inspiron 11z with an Intel Celeron Ultra Low Voltage processor and a 1366 x 768 pixel display. But the laptop has since been discontinued.