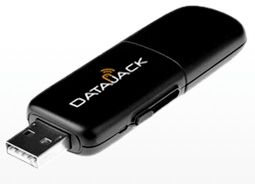 If you want a USB modem that will provide mobile broadband access in the US, you’ll usually have to sign up for a 2 year contract and commit to paying $60 per month for up to 5GB of data transfers. Or, you can sign up for a new DataJack modem which costs about $100 up front and $40 per month thereafter for unlimited data. Oh yeah, and there’s no contract, so you could use the service for a month or two, cancel it, and then sign up again half a year later.

On paper, DataJack has me second guessing my recent decision to pick up a CLEAR WiMAX modem. That’s especially true since while my mobile WiMAX modem works great, the home modem isn’t as fast as the DSL service I was hoping to replace, so I’m thinking of canceling the home service which means I’d end up paying as much as $45/month for WiMAX service that only works in a handful of cities when I could be paying $40/month for 3G service that is available nationwide.

But this time I think I’ll try not to be the early adopter and wait to see how well the service works for others before signing up.