The developer of the Cydia app store for jailbroken iOS devices has ported one of the most popular tools for tweaking a jailbroken iPhone or iPad to Android. Saurik’s Cydia Substrate is now available for Android, and the Winterboard theme engine which makes use of it is available as a free download as well. 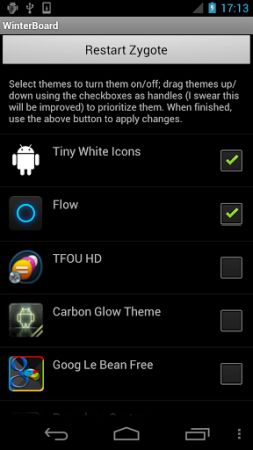 Android phones and tablets are easier to customize than iOS devices. You don’t need to root or jailbreak most Android devices to install a third party app launcher, for instance.

But Substrate and WinterBoard should let users install a group of themes, and then switch between them by choosing themes from a list. You can even enable multiple themes at the same time — so if one theme only offers an icon pack, for instance, and another replaces the launcher or notification area, you may be able to use both themes together.

While WinterBoard was originally designed for iOS, the Android version should support themes designed for popular app launchers including ADW, GO Launcher Ex, and Launcher Pro.

Substrate and WinterBoard are still new and they’re both still under development, so some features may not work. But the software should work with most rooted devices running Android 2.3 or later. It’s been tested on devices with ARM-based processors and products with x86 chips.

Right now there’s not actually very much that most users will be able to do with Substrate or Winterboard. But eventually it could give users far more options for customizing the look and feel of their Android devices.

Winterboard is the first app that uses Substrate, but eventually we could see other tools that use the framework to let you make other customizations to your phone or tablet’s behavior. Features which were previously only available by installing a custom ROM can now be installed or removed as easily as apps.