Google may have thwarted CyanogenMod developer Koushik Dutta’s efforts to make the Chromecast more useful by letting you stream all sorts of content from your phone to a Chromecast. But he’s shifted his efforts to the Apple TV.

Koush is showing off an upcoming CyanogenMod feature that lets you mirror your phone’s display on a TV using Apple’s AirPlay service. 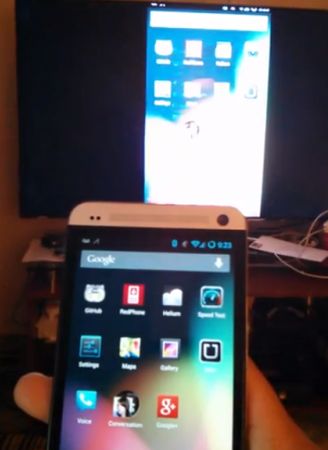 Basically all you would need to do is plug a $99 Apple TV into your television, fire up a phone running CyanogenMod, and choose to stream from your device to the Apple TV.

This’ll fill your TV with a copy of everything happening on your phone. That’s not just video — you can surf the web, view Google Maps, or run other apps. It could be an interesting way to give presentations — just fire up a slide deck on your phone and you can show it on a TV or projector in a conference room. But it’s more likely that you’ll just use this feature to bore your friends with pictures from your last vacation… or photos of your cat.

It looks like the AirPlay support is built into the same AllCast app that Koush has been working on, which means that there could eventually be a single app or service on CyanogenMod devices that’ll let users stream content to a TV using a Roku, Apple TV, or other devices… maybe even a Chromecast or Google TV one day.