It’s hard to make a keyboard that provides both tactile feedback and which is super thin… so some folks don’t even try. The Microsoft Surface Touch Cover, for instance, is a keyboard without moving keys. You just touch the surface to type. That makes it thinner than a typical keyboard cover for a tablet.

But it’s still a behemoth compared with the new keyboard CSR is showing off at the IFA trade show in Berlin. 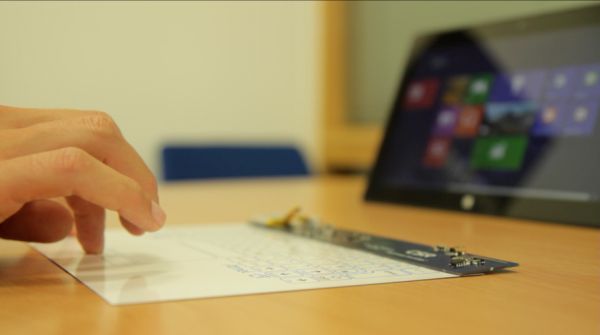 Still, the company says its flexible Bluetooth keyboard is the thinnest around, offering a compact way to add a keyboard to a tablet, phone, or other device. Since the entire surface is touch-sensitive, you can also use it as a wireless touchpad for a notebook or desktop PC.

The keyboard is compatible with iOS, Android, OS X, and Windows 8.

via Geeky Gadgets and Tom’s Hardware