PC makers have been making 2-in-1 laptops that can also function as laptops for years. There are a few ways to do it: Some models have hinges that allow you to flip the screen for use in tablet mode. Others have detachable keyboards.

One thing I haven’t seen before? A tablet with a detachable keyboard that uses a digital pen as part of the hinge. But that’s exactly what Compal designed for its Axis 2-in-1 laptop prototype with an “innovative pen hinge.” 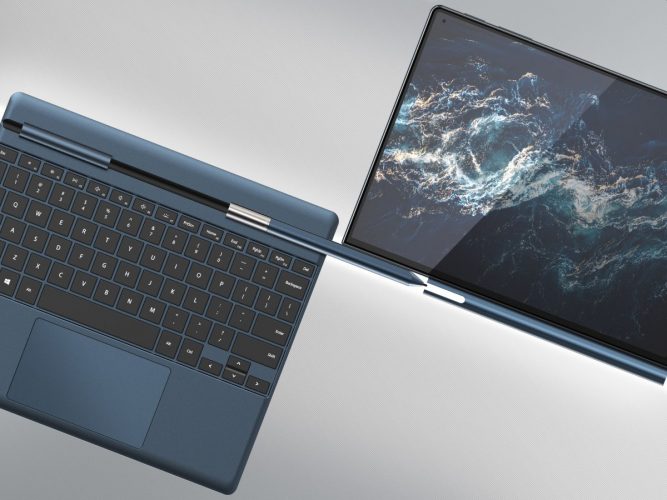 Found on the IF Design Award website, the Compal Axis looks like a pretty basic notebook at first glance. But the display can be removed from the keyboard, allowing you to use the computer as a handheld device with support for finger or pen input.

In laptop mode, the pen actually becomes part of the hinge by sliding into a slot along the bottom edge of the display and connecting to a second portion of the hinge that’s attached to the keyboard.

Compal says this means you’re unlikely to lose the pen, since it’s securely stored when you’re not using it. But if you do lose the pen, it also means that you may not be able to use the Axis as a laptop anymore. This design means you’re also probably going to need a second pen if you want to write or draw on the screen when it’s in laptop mode.

Overall it’s an interesting idea for a laptop/tablet design, but it seems to be a concept that’s a solution in search of a problem. I’m not sure it’s quite as compelling as some of the other Compal concept designs revealed this week.