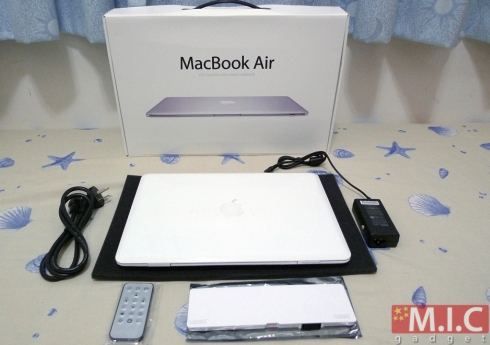 Over the past year or two I’ve seen plenty of Macbook Air knockoffs come out of China. But M.I.C. Gadget has the first photos I’ve seen of a knockoff that goes the extra mile and actually comes in a box labeled MacBook Air.

Under the hood, this machine is all netbook, with a 1.66GHz Intel Atom N450 CPU, 1GB of RAM, a 160GB hard drive, and 4 cell battery. It sells for under $300 and ships with Windows XP instead of OS X. Even though the box quite clearly shows a picture of a MacBook Air with OS X installed. In fact, when you open the box you get a driver disc and Apple instruction manual. Unforutnately you also get a notebook that looks vaguely like a MacBook Air, but not quite like the product pictured on the box.

Design-wise, the clone does sport a glowing Apple logo on the lid and a MacBook-like island style keyboard. It has a 13.3 inch, 1280 x 800 pixel display. It also has a removable battery, which is something you won’t find on a real MacBook Air. Of course, the MacBook Air battery is also good for 4 to 5 hours, while the knockoff runs for less than two hours.

M.I.C. Gadget has a boatload of additional photos and some hands-on impessions.