Foldable smartphones like the Samsung Galaxy Fold and dual-screen accessories like LG G8X ThinQ Dual Screen have blurred the lines between smartphones and tablets this year.

But what if you want to add a second screen to the phone you already have?

The castAway smartphone case offers a solution. Maybe. OK, it’s a weird one. But it could be kind of cool… if it works. 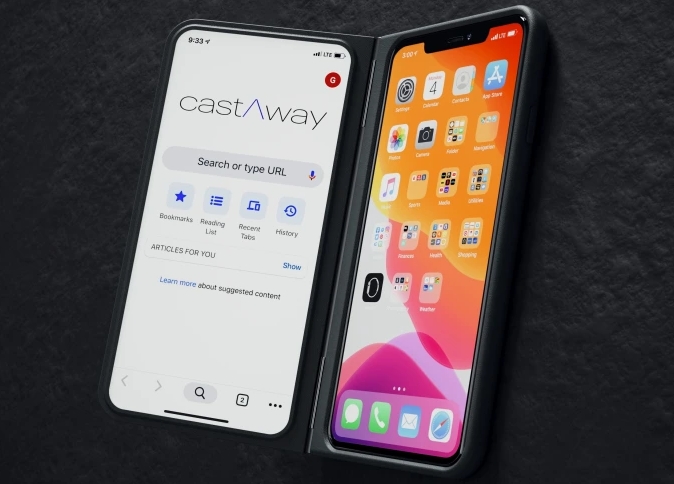 Here’s the idea — the castAway is a smartphone case with a built-in second screen for your phone. Put your phone into the case and you can view two apps side-by-side, watch a video while you surf the web, use the second screen as a keyboard or trackpad, and more.

Here’s why it’s a weird solution — castAway isn’t just a dumb case and screen powered by your phone. It’s actually a standalone, phone-sized tablet with an OP1 processor (aka the Rockchip RK3399), 4GB of RAM, and 32GB of storage. It has stereo speakers, WiFi and Bluetooth, and front and rear cameras. And it runs Chromium OS, the open source version of Chrome OS.

When you’re using castAway’s second screen with your phone, what you’re actually doing is using two different devices with two different operating systems — they communicate with one another over WiFi via an app called MultiTask+.

It remains to be seen how well that will work in real-world settings, but the price to find out isn’t all that high — castAway cases are going for $129 and up during an Indiegogo crowdfunding campaign with an estimated ship date of May, 2020.

That’s about half the suggested retail price… but it still seems surprisingly low for a device with halfway decent specs and a brand new hardware and software experience — so I’d proceed with caution.

The $50,000 crowdfunding goal also seems kind of low for a product like this — but it’s hard to know how much money has already been sunk into the design.

The castAway case comes in two screen sizes: 5.8 inches and 6.3 inches, and at launch, the plan is to support Apple devices from the iPhone 6 through the iPhone 11 Pro Max, and Samsung Galaxy devices including the Galaxy S7 and later and Galaxy Note 7 and later.