According to the latest global PC market report from research firm Canalys, PC makers shipped 458.2 million computers in 2020, up 17 percent from shipments in 2019.

Much of that growth came in the fourth quarter of the year, with a total of 143.7 million units shipped, up 35-percent from the same period a year earlier.

And a lot of that growth came from two product categories: Chromebooks and tablets.  Canalys says both saw record high shipments in the end of 2020. 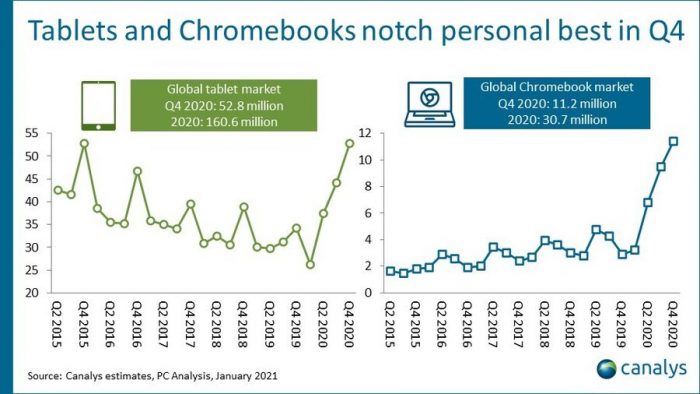 Tablet shipments, for example hit 52.8 million in the fourth quarter, led by Apple’s iPad line of devices. PC makers shipped 11.2 million Chromebooks during that period. At first, that number might seem pretty modest by comparison, but here’s the thing – tablet shipments were up 28 percent year-over-year. But Chromebook shipments? They were up a whopping 287 percent.

Canalys says Chromebook demand is on the rise due to the impact of the COVID-19 pandemic, which has many students working from home and many schools and governments trying to provide students with devices if they don’t already have the technology necessary for remote schooling.

According to the report, HP moved more Chromebooks during the fourth quarter than any other company, with 3.5 million units shipped. Lenovo, Acer, Dell, and Samsung rounded things out, with Asus slipping to sixth place.

Apple, meanwhile, dominates the tablet market with 19.2 million units shipped in Q4, which gives the company a 36 percent market share. Samsung, Amazon, Lenovo, and Huawei round out the top five.

And when it comes to overall PC shipments (which includes Chromebooks, tablets, and traditional PCs), Lenovo is at the head of the pack, followed by Apple, HP, Dell, and Samsung.

One thing to keep in mind is that it’s not necessarily a given that everyone even considers Chromebooks and tablets to be PCs. Canalys includes both in its global PC shipment reports, as some of the company’s competitors exclude one or the other.

You can find more details at the Canalys website.

One reply on “Canalys: Tablet and Chromebook shipments hit all-time highs in Q4, 2020”