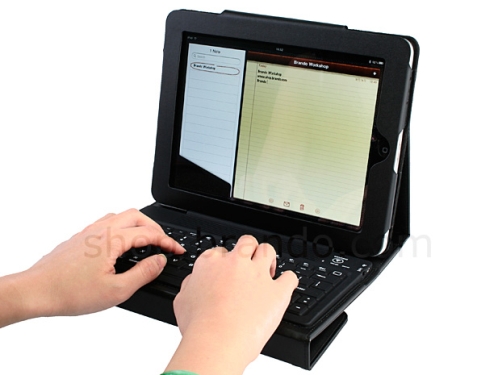 Last week I got a chance to check out a nifty new Bluetooth keyboard case from Kensington that kind of, sort of turns the iPad into a laptop. Shortly after that, I noticed that a number of other keyboard/case combos were popping up with nearly identical designs. I’m pretty sure what we’re seeing is a single product produced by a manufacturer in Taiwan, China, or some other place that’s not New Jersey only to be repackaged and sold under a different brand names. It happens all the time.

Anyway, the up shot is today Brando reached out to let me know they’d be selling an iPad Case with Bluetooth Keyboard that looks virtually identical to the Kensington one I checked out last week. The only difference? The Kensington version is expected to run $99 when it hits the streets next month.

Update: Well, it was nice while it lasted. Now Brando is charging $98.90 for the case.

Both versions feature synthetic leather protective cases and soft, waterproof and dustproof keyboards. Brando says the keyboard comes with a 450mAh Lithium battery which can run for about a week of continuous use or up to 100 days of standby, which sounds pretty close to the 3 months of battery life Kensington had promised (although Brando further explains that you can probably get about 20 days of usage if you actually turn on the keyboard for 4 hours each day).

You can prop up the tablet using the case and connect the keyboard over a Bluetooth connection to make text entry much easier. There are also some function keys on the keyboard that let you control media playback or hit the iPad home button without reaching up to touch the screen. My only complaint is that the keys feel soft and rubbery, but it’s still easier to type on the physical keyboard than the iPad’s on-screen virtual keyboard, plus you don’t lose screen space when you’re using the Bluetooth keyboard.

You can check out my brief video demo of the Kensington version of this keyboard case after the break.