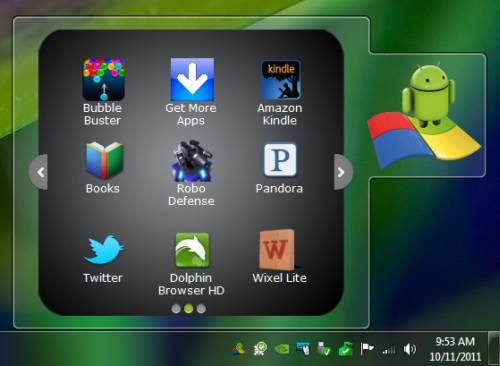 BlueStacks is a utility that allows you to run Google Android apps on a Windows computer. The developers have been showing demonstrations of BlueStacks for months, but now anyone can download and test an alpha version of the BlueStacks App Player.

The software comes preloaded with 10 apps including the Pulse news reader, Bloomberg app, and a couple of games. You can also download a few dozen other apps from BlueStacks. A few apps, such as Angry Birds, will require a paid Pro version of the app.

But really cool things start to happen when you install the BlueStacks Cloud Connect app on an Android phone or tablet.

You can use the Cloud Connect service to synchronize the apps on your mobile device with BlueStacks on a computer. While not every app I tried to sync was supported, I was able to install Twitter, the Dolphin HD web browser, the Amazon Kindle app, and Robo Defense on my Windows computer using Cloud Connect.

Most of the apps run reasonably well on a desktop computer — although Robo Defense feels a little sluggish. That probably has more to do with my relatively old PC than with BlueStacks.

The software emulates some of the basic functions of an Android device. When you’re running Android apps, they’ll show up in full-screen mode, although some apps can be rotated or resized. There are on-screen buttons for Back and Menu functions, and other buttons you can hit to view all your apps or to return to Windows.

The Pandora Radio app was able to stream music in the background, and Twitter ran in the background retrieving incoming messages. There’s a tiny notification bar at the top of the screen which you can pull down to view messages. This lets you see the song that’s playing on Pandora, for instance.

Unless you have a touchscreen PC, you’ll have to navigate your Android apps using a keyboard and mouse. That takes a little getting used to, since the scroll wheel on your mouse is useless, and you have to tap-and-drag on the screen to scroll instead. And honestly, why would you want to run the Dolphin HD web browser or Amazon Kindle app on your PC when there are perfectly good web browsers and eBook apps for Windows.

On the other hand, there are certainly some Android games that aren’t available for Windows, and BlueStacks makes it possible to run them. And if you have a tablet computer running Windows, BlueStacks could make it possible to run hundreds, if not thousands of touch-friendly applications without switching operating systems.

BlueStacks also plans to launch software eventually that will allow you to run Android apps on a Mac.