Tired of looking at rendered images of the upcoming BlackBerry smartphone with a slide-out keyboard and Android operating system. Well, now you can look at some actual photos of the phone that’s allegedly code-named “Venice,” thanks to Vietnamese site Tinhte. 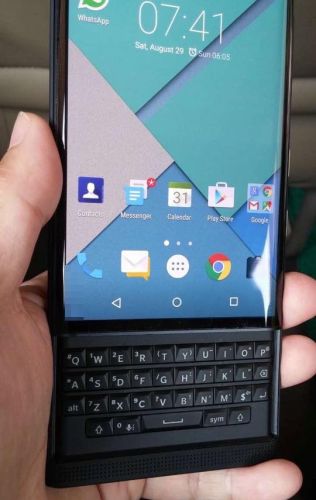 While it’s possible we’re looking at a clone rather than an actual product, Tinhte forum members have a pretty good track record with finding devices before they’re generally available to the public (or even announced).

As expected, the BlackBerry Venice seems to have a QWERTY keyboard that hides behind the phone when it’s not in use, and slides down when you want to type with a physical keyboard.

The photos clearly show that the phone is running Android Lollipop software and features a 16MP rear camera with Optical Image stabilization. That’s all in keeping with previous leaks related to this phone, which may be officially launched sometime around November.

8 replies on “BlackBerry Venice Android phone spotted in the wild”