The Asus Chromebook Flip C101 is a notebook with a 10.1 inch, 1280 x 800 pixel display and a 360 degree hinge that lets you flip the screen around and hold the compact notebook like a tablet.

It’s a modest update to the 2015-era Chromebook Flip C100, with one key difference: the new model has a significantly more powerful processor.

First introduced in May, the Chromebook Flip C101 isn’t available for purchase in the US or Europe yet. But it is up for pre-order in Japan. 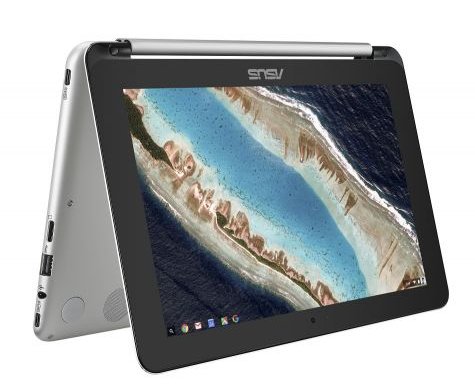 As expected, the new model features a Rockchip OP1 hexa-core processor (which is basically the same as a Rockchip RK3399).

It’s expected to be available with up to 4GB of RAM and up to 32GB of storage, although there will also likely be 2GB/16GB models available.

This is basically an entry-level convertible Chromebook, but the thing I like best about this 2 pound, 10.1 inch model is that it’s just as comfortable to use as a tablet as it is as a laptop, which is something I can’t always say about convertible notebooks with bigger screens and heavier bodies.

Asus is taking pre-orders for the Chromebook Flip C101 for 42,984 yen in Japan, which is a little under $400 US, but that may not tell us much about how much the laptop will cost when it goes on sale in the Western hemisphere.