French tablet maker Archos wants to get into the smartphone business. The company has already confirmed plans to launch its first phones this year, and a leaked roadmap recently hinted at three different models.

Based on the company’s naming conventions for Android tablets, it’s likely that these devices will feature 3.5 inch, 5.0 inch, and 5.3 inch displays, respectively. It also seems likely that each phone will have 4GB of built-in storage, and that the Carbon model will feature a lower resolution display and slower processor than the Platinum phones.

It’s not clear if Archos has changed its plans, if those reports were wrong, or if these retail listings are inaccurate.

Hopefully we should know more by the time the phones are expected to ship in June.

Update: MiniMachines has posted a spec sheet showing 4 Archos phones, most of which have slightly different names than those listed above. They all have MediaTek processors, with the cheapest featuring a single core CPU and the highest-end device sporting a quad-core chip. 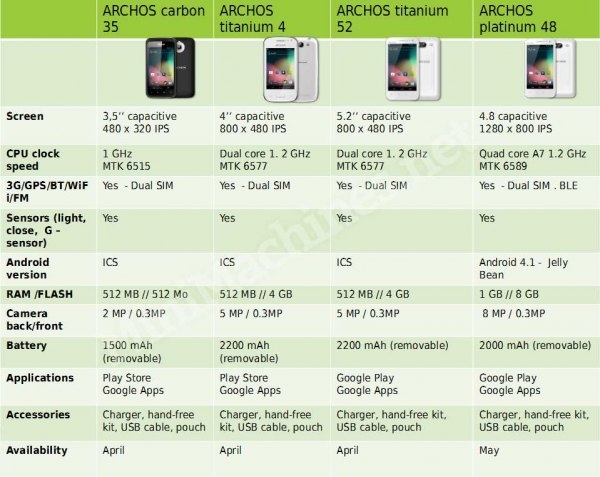