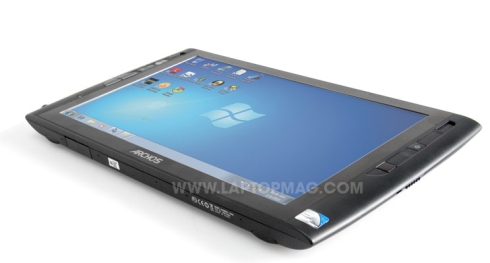 While the world waits for new tablets from Apple, HP, Dell, and others to hit the streets, I’ll let you in on a little secret. There are already a fair number of tablets available. Some have been available for years, while others are new models with Intel Atom processors running Windows 7. The latest version of the Archos 9 tablet is the latter, and Laptop Magazine has published a detailed review of this $549 tablet with an 8.9 inch display.

Unfortunately, the verdict is that this tablet probably ain’t worth the price.

The Archos 9 has a 1.2GHz Intel Atom Z515 processor, 1GB of RAM, and a 60GB hard drive. It has an 8.9 inch, 1024 x 600 pixel display and runs Windows 7 Starter Edition — which lacks some of the touch-friendly features available in Windows 7 Home Premium.

The device dos have 802.11b/g WiFi and Bluetooth wireless capabilities and a 1.3MP front-facing camera. So you can use the 1.8 pound tablet to surf the web, chat over Skype, and even watch Flash video — something the iPad won’t be able to do. But Mark says the touchscreen was unresponsive, the computer got uncomfortably hot, and the battery was good for just 4 hours. While that’s better battery life than you’ll get from the Hanvon BC10C tablet, it’s less than half the run time Apple is promising for the iPad.

Of course, you could always pick up one of the other tablets from Archos, including the Google Android powered Archos 5 Internet Tablet or the new Archos 7.