Apple’s newest flagship smartphone is gold… literally. For the first time, Apple will offer an iPhone in gold, silver, or gray colors. The iPhone 5S has an aluminum case, and has a premium look and finish when compared with the cheaper iPhone 5C.

The iPhone 5S is also the first phone to ship with Apple’s new A7 chip, the first 64-bit processor designed for smartphones.

The iPhone 5S will be available September 20th for $199 and up with a 2-year contract. 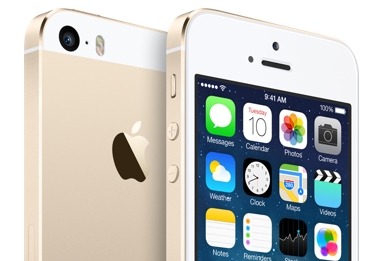 Apple says the processor is twice as fast as the A6 chip found in the iPhone 5 (and iPhone 5C), and 40 times faster than the chip used in the original iPhone. Graphics are also twice as fast.

The phone will ship with iOS 7, which is also the version version of iOS to support 64-bit architecture.

Apple says the iPhone 5S also includes a new motion co-processor called the M7, which measures motion data from the accelerometer, compass and gyroscope. It determines if you’re walking, driving, or sitting still, among other things. And that lets it communicate with apps like Nike+ Move for fitness tracking and activities.

According to Apple the iPhone 5S has better battery life than the iPhone 5, at up to 250 hours of standby time, 40 hours of music playback, 10 hours of web browsing over 4G LTE, 3G talk time, WiFi-browsing, or video playback.

The camera has a 5-element lens with an F2.2 aperture, a larger image sensor, and two LED flash bulbs for better color when you shoot photos in the dark. One LED is white, the other is amber. The phone combines the two to get the right color so that your photos don’t look washed out.

The iPhone 5S also has automatic image stabilization and a burst mode which lets you snap up to 10 photos per second. And there’s a new slow motion mode that captures 720p videos at 120 frames per second. That lets you play them back at one fourth the regular speed.

Tired of entering a passcode to unlock your phone? Apple is adding a fingerprint sensor to the iPhone 5S, allowing you to unlock your device by placing a thumb on the phone’s home button. 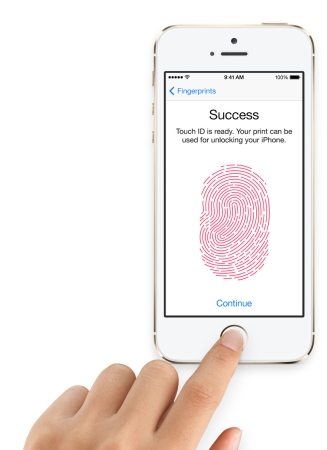 The sensor works no matter how you’re holding the phone, and it’s built into a laser-cut sapphire crystal capacitive touch panel on the home button, so hopefully you won’t scratch your button and find yourself unable to unlock your phone.

If it seems silly to have the fingerprint scanner there just to let you unlock your device, that’s OK. It does more. You can also use it to trigger actions in apps. For example, you can tap the button to verify your iTunes account to purchase apps or digital content instead of typing in your password.

Bargain hunters can opt for the iPhone 5C for $99 and up.

Or you can pick up an iPhone 4S with 8GB of storage for free with a 2-year contract.