Motorola may be the first company to begin rolling out an Android 5.0 Lollipop software update to smartphone users. A small group of testers with Motorola Moto X 2014 Pure Edition users have started to receive Android 5.0 before anyone else… and that includes users of Google’s Nexus 4 and Nexus 5 smartphones.

It might take a little while for Motorola to roll out the software to all Moto X users. Right now it’s just releasing a “soak test” to folks who’ve signed up to test early builds of software. But if you’re adventurous you can try loading the software update manually. 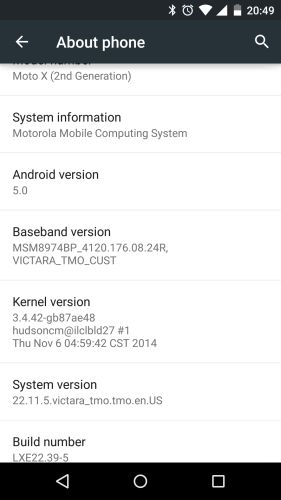 Motorola hasn’t officially released a downloadable update… but xda-developers forum member graffixnyc has posted a link to the file, along with instructions for installing it on a 2nd-generation Moto X.

Note that some folks (particularly those with rooted devices) have had some trouble installing this update manually, so make sure to read through the xda-developer thread before beginning… or just wait for Motorola to push the software update to your phone.

According to Motorola’s release notes, the software update offers Android 5.0 Lollipop and “other improvements,” including Google’s new Material Design, more control over notifications, a new recents menu, and a redesigned Quick Settings panel, among other things.

Moto X users will also continue to be able to use Motorola-specific features including Moto Display for displaying notifications even when the screen is off, Moto Actions gestures controls, and Moto Assist to now lets you choose when you don’t want to be interrupted by alerts or notifications.

You can also opt to use Android 5.0’s Ambient Display feature which is similar to Moto Display… but Motorola says it’ll run down your battery more quickly since it doesn’t use the low-power co-processor in the Moto X and it won’t allow you to wake your screen with a Moto Actions approach gesture.

Update: The folks at Droid Life have posted a hands-on video showing Android 5.0 on the 2nd-gen Moto X.