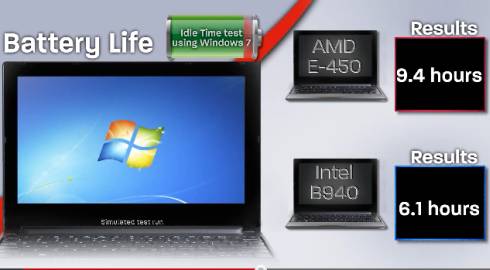 Last month AMD introduced new E-300 and E-450 processors for low power notebook and desktop computers. Like last year’s 1.6 GHz E-350 chip, the new processors combine graphics and CPU functions onto a single chip with a TDP of about 18 watts. The 1.65 GHz E-450 though, is a little faster than the 1.3 GHz E-350, while the E-300 is a little less powerful, but it’s also a cheaper option for lower priced computers.

So what exactly are these new chips good for? AMD has put together a short video showing the processors strutting their stuff by running through everyday computing tasks such as running Microsoft PowerPoint, Word, and Outlook.

The company also claims you’ll get better battery life from a computer with an E-series chip than from a system with a similar Intel processor — but this will clearly vary depending on which Intel chip you pick. For the purposes of its tests, AMD pitted the E-450 against an Intel B940, and the E-300 against an Intel B800.

It’s not surprising that you’d get better battery life out of AMD’s chips, since the company chose to compare them with 35W Intel Celeron processors — but it’s not clear that Intel really has anything comparable to AMD’s E-series processors at the moment. Intel Atom chips use much less power, but are far less capable, while most of the company’s higher end chips use 35W or more.

HP says its new Pavilion dm1 laptop with AMD’s latest chips will get up to 10 hours of run time. The dm1 is scheduled to ship later this week, which will make it one of the first laptops to feature AMD E-300 and E-450 processor options.