Amazon is taking the battle for the living room pretty seriously. About half a year after launching the $99 Amazon Fire TV, the company has a smaller, cheaper option.

The Amazon Fire TV Stick is a $39 device that you plug into the HDMI port of your TV. You can use it to stream internet video from Amazon, Netflix, Hulu, ESPN, and HBO, among other services.

It costs just a few bucks more than a Google Chromecast, but it comes a wireless remote control and Amazon says the Fire TV Stick is also more powerful than a Chromecast. Oh yeah, and if you order one by October 29th, Amazon Prime members can get a Fire TV Stick for $19. 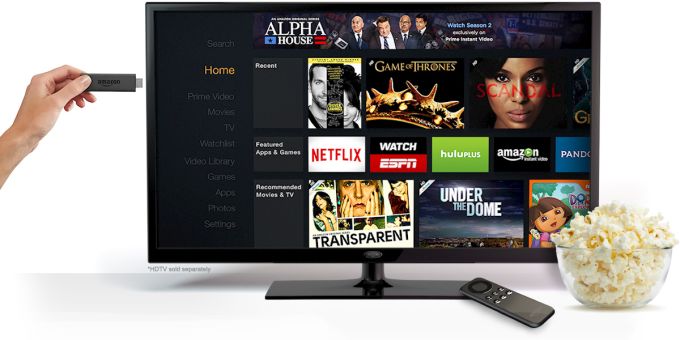 Note that you don’t actually need to be an existing Prime member to qualify for the discount: You can sign up for a 30-day free trial to get the promotional price. Just make sure to cancel your membership if you don’t plan to keep it (although you’ll lose the ability to stream Amazon Prime Instant Video content to the Fire TV if you do that).

The device comes with a free Fire TV remote that you can use to navigate apps, and you can also use a Fire TV Remote App on a phone or tablet running Android or Amazon Fire OS. An iOS app is also on the way.

Like the more expensive Fire TV, the new Fire TV stick supports voice search… but the remote control that comes with the stick doesn’t have a mic. You’ll need to either opt for a $30 Fire TV Voice Remote or use the mobile app if you want to use voice search.

Amazon says the Fire TV Stick also supports over 200 games, and you can pair an Amazon Fire TV Game Controller or another third-party Bluetooth game controller with the stick.

Like Roku and Chromecast devices, you can also use the Fire TV Stick to mirror your phone or tablet display on the big screen.

Overall the Fire TV Stick could be a more versatile TV streaming device than the similarly-priced Chromecast… although it might really be designed to appeal to a different audience. Part of what makes the Chromecast special is that you don’t need to learn navigate a TV-centric user interface at all. Instead you just find content using apps on your phone or tablet and fling them to a TV.

Google offers the $99 Nexus Player with Android TV software for folks that are looking for a smartphone-free way to get internet media on their TVs. The Chromecast is a smaller, cheaper, simpler option.

Amazon’s approach to offering a smaller, cheaper device seems to be simply to offer a model with the same basic functionality as the $99 Fire TV… but with less powerful hardware.

The Fire TV Stick may also support a feature that’s missing from the Chromecast: Amazon says you’ll be able to use it in hotels, dorm rooms, or other places where you need to open a webpage to enter a password to login to WiFi. That feature is listed as “coming soon,” suggesting it won’t be available at launch.

While the Amazon Fire TV Stick is available for pre-order immediately, it won’t actually ship until November 19th.