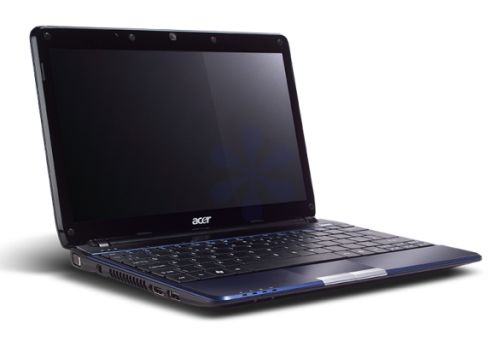 OK, I admit it. I cringed writing that headline. Because really, netbooks are notebooks. And I’ve been reluctant to call notebooks with 11.6 inch displays netbooks. But there’s no escaping the fact that Dell, Asus, Acer, Lenovo, and other computer companies are releasing 11 and 12 inch notebooks under the same line as their 9 and 10 inch netbooks. But now Acer’s going a step further toward blurring any distinction between netbooks and fuller feature notebooks with its Acer Aspire Timeline 1810T.

Basically, Acer tends to throw the “Aspire One” name on its Intel Atom-powered netbooks. The company recently introduced a new “Timeline” series of laptops that are also thin and light, but which come in sizes ranging from 13.3 inches to 15.6 inches.

Now Macles is reporting that Acer is launching the Aspire Timeline 1810T which will not only have an 11.6 inch display, it looks like it has practically the same body as the Aspire One 751, which Acer may be phasing out.

While the Aspire  One 751 has a 1.22GHz Intel Atom Z520 CPU, 1GB of RAM, and a 160GB hard drive, the Timeline 1810T will reportedly have a much faster 1.4GHz Intel ULV SU3500 CPU. I know it doesn’t sound much faster, but you can’t just a chip just by the gigahertz these days. The netbook will also have integrated GMA 4500MHD graphics with HD video acceleration, and support up to 4GB of RAM. It will also have 802.11a/b/g/n, optional Bluetooth and 3G modules, and an 8 hour battery.  It will come with Windows Vista Home Premium with the option of a free upgrade to Windows 7 when that operating system is released later this year.

No word on how much the Timeline 1810T will cost, but my guess is it’ll be at least a few bucks more expensive than your typical netbook.