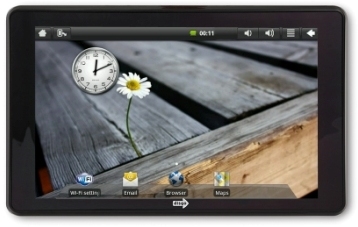 There was a time (just a few months ago), when if you wanted to pick up a cheap tablet-style computer running Google Android, you either had to live in China or be willing to pay to ship a product from China. Now the times they are a-changing.

Not only are companies including Archos, Samsung, and Dell bringing Android tablets to market, but we’re starting to see some of those cheap Chinese tablet show up in Europe and the US under different brand names. One of the first was the Augen GenTouch78, but it certainly won’t be the last.

The disgo Tablet 6000 is one of the latest budget Android tablets headed to the UK. This little guy hs a 7 inch, 800 x 480 pixel display and runs Google Anroid 2.1. It has 256MB of RAM, a 100mAh battery, stereo speakers, a 3D graphics accelerator, microSD card slot, USB port, and HDMI output.

While the disgo Tablet 6000 doesn’t ship with Google Android Market access, the company is preloading it with the SlideMe market as well as several third party apps including the Skyfire web browser.