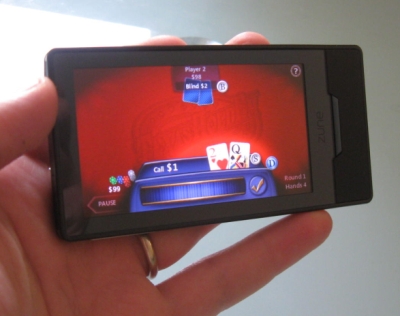 The Zune HD is an interesting device. On the one hand it’s got a slick user interface, a speedy processor, and a high quality OLED display, which make it a rather attractive alternative to the iPod touch. On the other hand, there are virtually no third party apps for the Zune HD, which means that you end up spending about as much money for a Zune HD as you do for an iPod touch — but one is just a media player that can handle a few games while the other is a handheld tool that can play music and movies and run thousands of third party games and other apps.

In fact, the lack of third party apps was my number one complaint when I reviewed the Zune HD last year. But it looks like things could soon change — and it’s not Microsoft’s doing. A group of hackers have released a developer kit called OpenZDK that allows third party developers to write native apps for the Zune HD.

Up until now, third party developers could use Microsoft’s XNA Game Studio to write apps, but it didn’t provide full access to all of the Zune HD’s features. The device has an NVIDIA Tegra processor with OpenGL ES 2.0 support and custom shaders. OpenZDK lets developers write apps that will use all of those features.

Unfortunately in order to install third party apps built using OpenZDK you’ll need to install Microsoft’s developer tools on your PC. They won’t show up in the Zune Marketplace anytime soon. But hopefully if there’s enough interest in creating and installing third party apps for the Zune HD, Microsoft will loosen its restrictions a bit. Or maybe that’s just wishful thinking.

One reply on “Zune HD hackers launch development kit, homebrew apps about to get awesome”