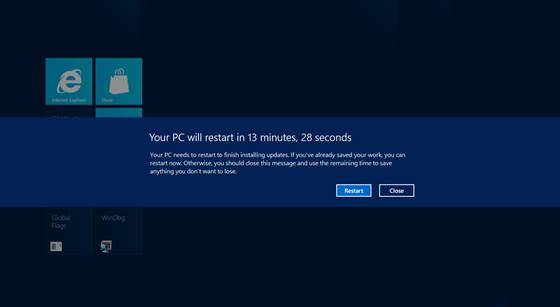 Microsoft is changing the way Windows Update works for Windows 8. You’ll still be able to choose whether to download and install updates automatically or manually, but Microsoft is trying to minimize the number of times you’ll have to restart your computer after applying a software update.

Like all versions of Windows, the new operating system will have to restart your computer from time to time in order to install some updates. It does this in order to make sure that processes that are being updated aren’t currently running — and even if it was possible to update those processes without shutting them down, the changes wouldn’t take effect until after you did restart your computer. That could pose a risk if you’re installing a critical security update.

But nobody likes seeing those messages that let you know you have 15 minutes to shut down your computer or it will automatically restart — closing any open apps in the process, and potentially losing some of your data.

So Microsoft has figured out a way to consolidate all of the updates that require restarting your computer, and starting with Windows 8 you’ll only have to restart your PC once a month.

Some updates can be installed right away without shutting down your PC. But Windows 8 will save up all of the other updates that do require a reboot and run them once a month — right after Microsoft release that month’s security updates on the second Tuesday of the month.

In rare instances when there’s a serious security update that needs to be issued right away, Microsoft may push a restart sooner, but for the most part we’re looking at once per month recommended reboots.

Microsoft is also doing away with the frequent pop-up messages letting you know when it’s time to restart. Instead you’ll see a message on the login screen for three days before Microsoft forces a reboot — and if you do fail to manually restart your computer in that time, and you’re not near your computer when Windows is ready to reboot, it will hold off until you come back instead of closing apps in the background.

At that point it’ll give you 15 minutes to save your data or else.

Overall the new system does sound much less intrusive than previous versions of Windows Update. But it’s also clear that Microsoft really doesn’t want users to bypass the login screen when resuming from sleep, because if you do you may not notice the notifications letting you know that Windows wants to reboot your computer.