Dell stopped supporting the Streak 7 Android tablet with software updates ages ago. But just because the last official software for the Dell Streak 7 is based on Android 3.2 doesn’t mean the 7 inch tablet can’t handle something a bit more modern.

A group of independent developers have ported CyanogenMod 10.1 to run on the Dell Streak 7, bringing Android 4.2 Jelly Bean posthumously to the tablet. 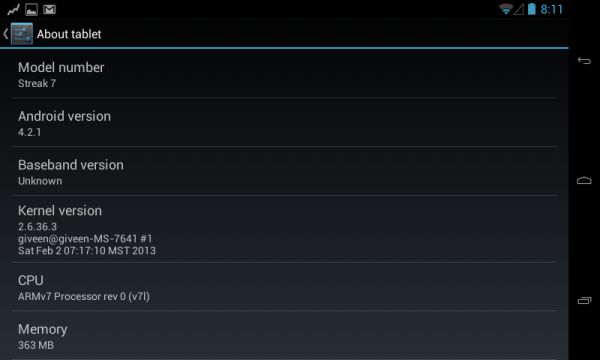 The unofficial CM10.1 build is still a work in progress. It doesn’t support the camera, and external microphones don’t work. But WiFi, Bluetooth, GPS, and touch all work, among other things.

There are tools available to update your tablet to Android 4.2 using a Windows or Linux computer. Keep in mind, if anything goes wrong, you’re probably on your own. I wouldn’t expect Dell to help you repair a device you brick when trying to install an unofficial firmware update.

We’ve seen the community step up like this before. Unofficial builds of Android 4.1 and Android 4.0 were released for the Dell Streak 7 last year.

With a low resolution 800 x 480 pixel display, 512MB of RAM, and an NVIDIA Tegra 2 dual core processor, the Dell Streak 7 isn’t exactly a bleeding edge tablet. But if you’ve already got one lying around, it’s nice to know that you can breathe a little new life into it with a software update.