AMD’s Ryzen processors have been making waves in the desktop and laptop PC space for the past few years, offering huge performance gains over previous-gen AMD chips and competitive pricing to help them stand out against chips from Intel.

Earlier this year AMD announced it was also bringing Ryzen architecture to the embedded space, with the Ryzen Embedded V1000 line of chips as well as the higher-power Epyc Embeddded 3000 series.

While the upcoming Smach Z handheld gaming PC is expected to feature a Ryzen Embedded 1605B processor if and when the handheld ever ships, I haven’t heard about many other devices using Ryzen Embedded chips… until now.

The UDOO BOLT is a single-board computer aimed at developers. It comes with a choice of dual-core or quad-core Ryzen Embedded chips. And it’s up for pre-order through a Kickstarter crowdfunding campaign for $229 and up. 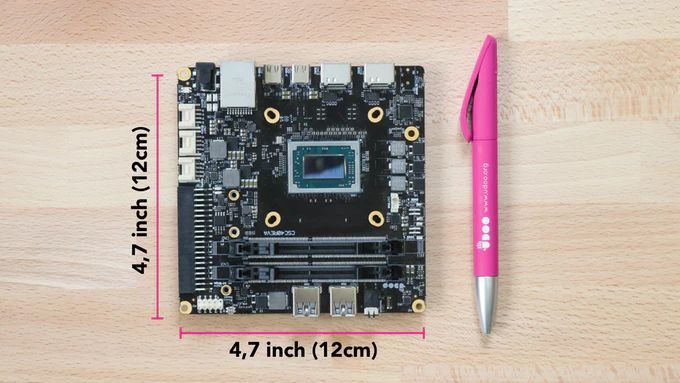 For that price you get a model with a Ryzen Embedded V1202B dual-core processor featuring Vega 3 graphics.

A pledge of $279 or more gets you a model with an AMD Ryzen Embedded V1605B quad-core processor and Radeon Vega 8 graphics.

There’s also support for SATA III or M.2 2260/2280 solid state drives. And the board is also Arduino-compatible and features GPIO, UART, and other analog and digital I/O connectors.

UDOO is positioning the BOLT as a maker board, but it looks like it could be pretty attractive for folks looking for a compact, low-power solution for a home theater PC, a light-duty gaming machine, or even a VR device.

The board measures about 4.7″ x 4.7″ and the Ryzen Embedded chips selected by UDOO both have TDP ratings ranging from 12W to 25W. But they also have the graphics chops to handle 4K and HDR video, and UDOO says the system is VR-ready and supports Oculus Rift, Windows mixed Reality, and other VR headsets. You can also run Windows or Linux on the board.

Note that the starting prices mentioned above are early bird specials. You’ll pay extra if you aren’t one of the first to snag a deal… and you can also pay extra for additional perks including RAM, a metal case, HDMI and SATA cables, and a wireless card.

The entry-level models also don’t include a power supply and cable, so you might want to consider pledging one level up if you don’t want to supply your own.

While there are always risks involved in crowdfunding projects, UDOO has been making single-board computers for a few years – I first covered one of the company’s crowdfunding campaigns way back in 2013. You can find out more about the company at the UDOO website.