Business cards continue to be a thing in the 21st century because despite the fact that many folks are carrying around smartphones capable of storing contact details for millions of people, it’s still quicker and easier to hand someone a card than to sit around while they type your details into a phone.

A lot of cards probably get tossed out… but some folks have found ways to use to tech to make truly innovative, memorable, and maybe even useful business cards.

There was the developer who made a business card that’s also a musical instrument, or the one who made a card that acts as a Magic 8-Ball game. But George Hilliard’s business cards may be the first that are actually wallet-sized computers that run Linux. 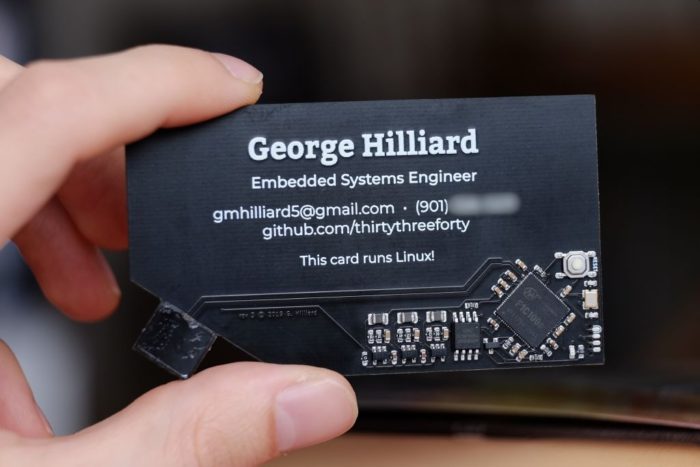 The business card-sized device is a business card. Hilliard’s name and contact details are printed on one side.

But it also features custom printed circuit board, an Allwinner F1C100s system-on-a-chip (that consists of an ARM9 processor with 32MB of integrated RAM) plus 8MB of flash storage.

The little device is basically a full-fledged computer with a Linux 5.2 kernel and a few applications pre-installed including a Python interpreter and some games including 2048 and rogue. There’s also room for Hilliard’s resume.

One thing the business card doesn’t have is a display. But thanks to its USB port and support for the Linux USB Gadget framework, you can plug the device into a computer’s USB port and boot up the operating system in about 6 seconds. Note: it’s probably not a good idea to plug a random, bootable USB device into your computer unless you already trust the person handing you the gadget.

While a Linux PC-on-a-business card might not be the best option for everyone, it makes a lot of sense for someone whose in the line of work that Hilliard is — he’s an embedded systems engineer that designs hardware and software for small Linux devices. Why not include a sample of his work on a business card?

That said, this isn’t one of those pay $20 to print 500 card kind of deals. Each card costs about $3 to make. That’s kind of pricey for business cards — but awfully cheap for fully functional Linux computers.

Of course, Hilliard is also getting plenty of free publicity for being one of the first folks to design a card like this — pictures of his business card are now being shared by folks at Hacker News, Reddit, and tech news sites like this one. So he might not actually need to give out that many cards in the foreseeable future.

You can find more details at Hilliard’s blog and the github page for the project.