For some reason Google has two different smart TV platforms. You can buy a $35 Chromecast and plug it into your TV to stream music, videos, and other internet content, but you’ll have to use your phone, tablet, or computer as a remote control and navigation device. Or you can buy a device that runs Google’s Android TV software if you want a physical remote control and a graphical user interface that runs on your TV.

A new device that showed up at the FCC website this week looks like it blurs the lines. It’s about the same size as a Chromecast, but seems to run Android TV software. It’s also got a big G logo on the top, leading some folks to speculate that this could be some sort of official Google product, maybe a “Chromecast Pro?”

I doubt it. But it does look like a pretty nice little Android TV device. 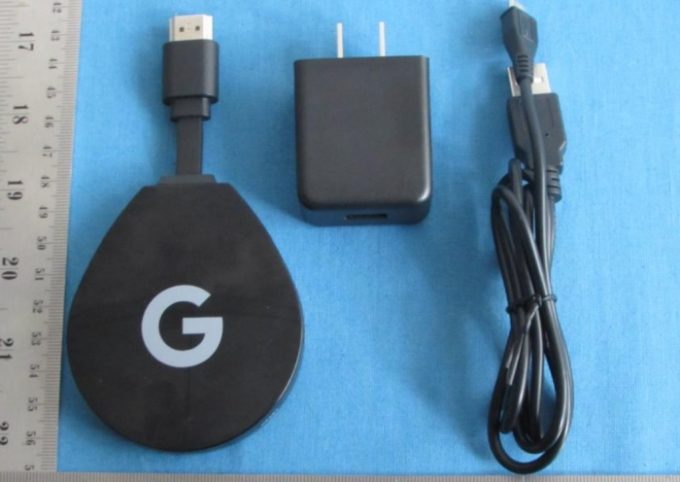 Under the hood, this little HDMI dongle features an Amlogic S905X processor, 2GB of RAM, and 8GB of eMMC storage. Those are basically the same specs you get with a Xiaomi Mi Box Android TV device, but the new model is even smaller.

The user manual posted for the device shows that it runs what looks like Android TV software and it comes with a remote control that has a dedicated button for triggering Google Assistant, allowing you to control the media player by voice, ask questions, or perform other voice actions.

So why do I think this isn’t an official Google device?

Update 4/11/2018: I spoke too soon. The pictures and user manual have all been removed from the FCC website. That could mean this is an official Google device. Or it could mean that Google and/or SEI Robotics saw all the articles about the device spreading around the web this week and someone decided to request the FCC pull some of those documents from view.

While it’s possible that Google could have tapped a relatively unknown Chinese manufacturer to produce its next media streaming device, I find it highly unlikely that the companies would have been careless enough to allow the FCC to make the user manual and photos visible to the public before the device was officially launched.

That said, while we’ve seen a number of cheap Chinese media streamers that run Android software in the past few years, most haven’t had access to the official Android TV software or Google Assistant. If this model truly does have both of those features, it could be a nice alternative to existing media streamers. But if Shenzhen SEI Robotics is somehow faking it by slapping an Android TV lookalike user interface over stock Android software and failing to deliver the true Google Assistant experience, then you might be better off looking elsewhere.