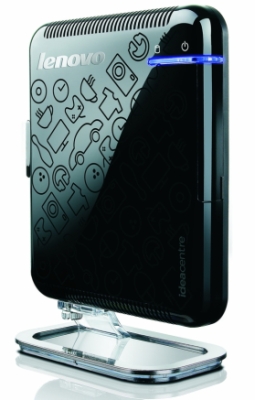 Lenovo dropped a picture and next to no information about an upcoming nettop line in a Twitter post yesterday. All Lenovo gave us was a name, and the fact that the IdeaCentre Q100/Q110 nettops would be some of the thinnest in the world. Since Lenovo refers to the computers as nettops, it’s a safe bet you’re not going to find a quad-core processor in that little case. But here’s another hint: if that case looks familiar, it’s for good reason: the IdeaCentre Q100 appears to be a rebranded Pegatron nettop. In fact, the press shot is virtually identical to the one for the Medion Akoya Mini E2076 D, which is also based on the Pegatron nettop.

So here’s the good news: that Pegatron nettop is built around the NVIDIA ION platform, which means you can probably expect HD capable graphics and maybe even an HDMI port. The system will also likely have either a 1.6GHz Intel Atom 230 CPU or a dual core Atom 330 processor, 1GB of RAM, and a 160GB hard drive. Odds are you’ll be able to configure this system with Windows Vista or eventually Windows 7 and order it with more RAM or a larger hard drive as well.