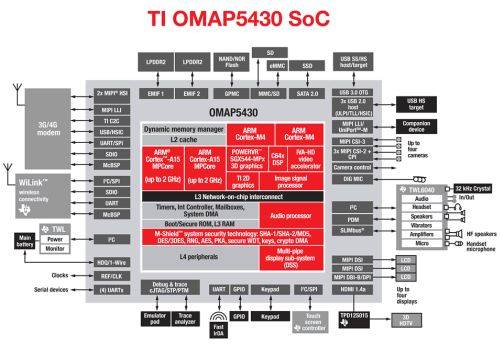 Remember when words like gigahertz were used for computer chips and you really didn’t know that much about the chip powering your phone? That’s all changed in recent years, with low power ARM-based chips strutting their stuff with clock speeds of 1 GHz and above, multi-core chip designs, and ARM based chips showing up in tablets, smartbooks, and maybe even PCs one day as well as phones. So what does the future hold for this space? Texas Instruments has let us in on its vision.

The company unveiled its new OMAP 5 designs today. The chips won’t actually ship for another 18 months or so, but when they do hit the streets you’ll be looking at dual core ARM Cortex-A15 chips with clock speeds up to 2 GHz. But that’s just the tip of the iceberg.

While the clock speed might make you think that the OMAP 5 chips will be twice as fast as the 1 GHz NVIDIA Tegra 2 chips on the streets today, the Cortex-A15 architecture will likely make these chips even more like 3 time as fast as an OMAP 4 chip or Tegra 2 chip (although I don’t expect NVIDIA to sit on its hands for the next year and a half, so Tegra 3 or 4 will likely be much more competitive).

Texas Instruments says the 28nm chips will also be able to handle 3D video playback and 2D upsampling to 3D at 1080p HD resolutions. The chips can control up to 4 cameras at the same time, and support up to 8GB of RAM.

Oh yeah, despite all those performance gains, Texas Instruments says the new chips will use an average of 60 percent less power than an OMAP 4 chip.