Sony has been offering Google TV boxes for a few years, and up until now they’ve all looked like small set-top-boxes. But Sony’s next model is a small stick that you can plug right into your TV’s HDMI port so it hides behind or to the side of your television.

Like earlier models, the new Sony NSZ-GU1 is designed to let you search your local TV listings, watch internet video on your TV, or run other apps from the Google Play Store.

But it looks more like an Android TV stick than a typical set-top-box. 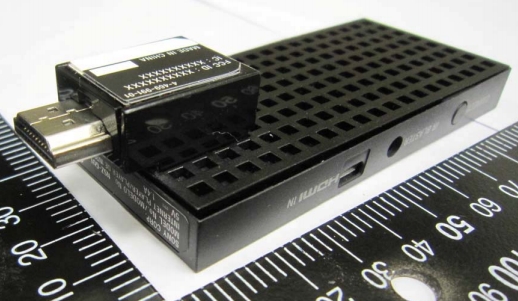 The Sony NSZ-GU1 passed through the FCC website earlier this summer, but photos and a user manual were recently added.

The device features a Marvell DE3108-A1 processor, 1GB of RAM, 802.11b/g/n WiFi, Bluetooth 3.0, and an HDMI connector. If you have a TV that supports MHL, the Sony device can draw power without any additional cables.

But you still might have to make a mess to run cables that will let the NSZ-GU1 control your cable or satellite box using an IR blaster. There’s also an HDMI input, letting you run a line from your TV provider’s box to the Google TV box.

The device also has a bit of an odd shape. While most of the hardware seems to be in a rectangular box, the HDMI/MHL port looks like it was tacked onto the bottom.

At 4.3″ x 1.65″ x 0.9″ the Sony NSZ-GU1 is smaller than pretty much any other Google TV box released so far, but it should offer similar functionality. On the other hand, it’s absolutely enormous when compared with Google’s tiny Chromecast, which measures just 2.8″ x 1.4″ x 0.5″.

The Chromecast, though, doesn’t have HDMI input, a TV blaster, or the ability to run third party apps. It’s just designed to let you send internet videos to your TV.