I can’t decide if the Sony Xperia Touch represents an exciting new product category in the personal computing space, of if it’s just an overpriced novelty. It could be both.

The Xperia Touch is basically an ultrashort throw laser projector that beams content onto a flat surface… and then uses cameras to watch you interact with that surface, turning any tabletop, desk, or wall into a sort of toucshcreen computer.

The only catch? The Sony Xperia Touch will sell for €1499 ($1591) when it launches in select countries this spring. 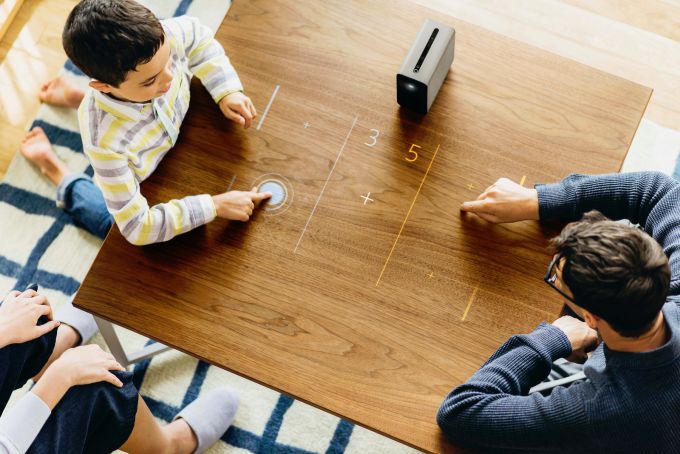 Sony’s crazy new projector measures about 5.6″ x 5.3″ x 2.7″ and weighs about 2.1 pounds, making it relatively easy to carry around. But the internal battery is only good for about an hour of run time while playing videos, so odds are that you’re mostly going to want to keep this thing plugged in while you’re using it.

The Xperia Touch runs Google Android Nougat software and features 3GB of RAM, 32GB of eMMC storage and a microSD card slot for removable storage. I haven’t seen any details about the processor.

So far, those sound like the specs for a mid-range smartphone. What makes the Xperia Touch tick though, is the 100 lumen laser diode projector with a 4000:1 contrast ratio, 1366 x 768 pixel resolution, and automatic focus. It can project images between 23 and 80 inches in size.

There are also stereo speaker, a 13MP camera and and IR sensor which provides support for 10-point multitouch input.

You can use the system to run Android apps, play games, make video calls over Skype or other video services, watch videos, or even use PlayStation 4 Remote Play to stream games from a PS4 to the Xperia Touch. And as the demo video makes clear, the Xperia Touch can project images either on a horizontal surface like a table or a vertical one like a screen or wall.