Most current smartphones use a type of flash storage called eMMC. But Samsung has started mass producing a new embedded memory solution which the company says offers faster speeds without consuming any more power. 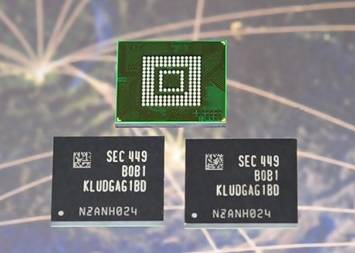 The new memory offers sequential read speeds up to 350 MB/s and sequential write speeds up to 150 MB/s. That’s substantially faster than the 250 Mb/s and 125 MB/s speeds you’d get with the eMMC 5.1 solution Samsung introduced just last week and nearly 4 times as fast as a typical removable SD card.

While the company will likely make the storage solution available to any company that wants to include the embedded memory in upcoming smartphones or tablets, Samsung’s announcement that mass production has begun comes just a week ahead of the 2015 Mobile World Congress trade show, where the company is expected to unveil the Samsung Galaxy S6 smartphone.

A report suggesting Samsung would use UFS 2.0 storage in its upcoming flagship phone surfaced in November. The company hasn’t confirmed that the Galaxy S6 will be the first phone to use the new embedded memory solution. But the timing of this week’s announcement is certainly interesting.