It’s been more than four years since Google launched Google+ as a social network… and while the site has certainly attracted some loyal users, it’s never quite reached the same kind of ubiquity as Facebook and Twitter.

Recently Google has started streamlining the service, first by unbundling features such as Google Photos and YouTube from Google+ and now by redesigning Google+ to better emphasize some of the components people are using. 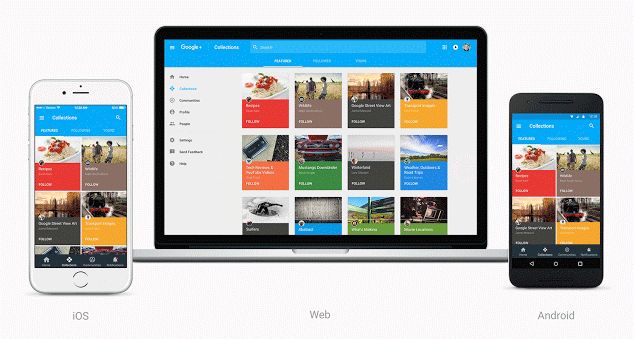 The new apps for web, iOS, and Android are largely focused on communities and collections, which give users a place to have conversations about the topics they’re interested in and a way to find posts about specific topics.

Other changes include speed and search improvements and a new home stream view with a more colorful design.

For now the new user interface is opt-in, when you see a “Let’s Go” prompt on Google+ you can click it to try a preview of the new version. If you don’t like it, you can go back… for now.

When Google+ first launched, the company positioned it as a social network that would give users more control over their interactions with other users, by letting you create circles, set different preferences for those circles, and then drag and drop your contacts into those circles. It was kind of a hassle to set up and it didn’t really feel all that different from what you could do with Facebook.

But Google+ has been a place where people have found they can have long, in-depth conversations about specific topics, and it looks like the new version of the service is designed to emphasize this sort of interaction rather than the kind of personal interactions people usually engage in on Facebook or the short updates that are blasted on Twitter.

One reply on “Revamped Google+ is focused on communities, collections”