Qualcomm is making a whole bunch of announcements ahead of Mobile World Congress, including launch details (and carrier partners) for the first Windows on ARM PCs, the introduction of a new Snapdragon 845-powered VR headset platform, a new AI platform, and a new 802.11ax-ready solution for phones, tablets, and laptops.

But Qualcomm also has a few Bluetooth audio announcements worth paying attention to.

The company has a new chip that should bring better battery life to truly wireless earbuds, and Qualcomm has revealed that devices with its Snapdragon 845 processor will be able to stream audio to multiple devices simultaneously. 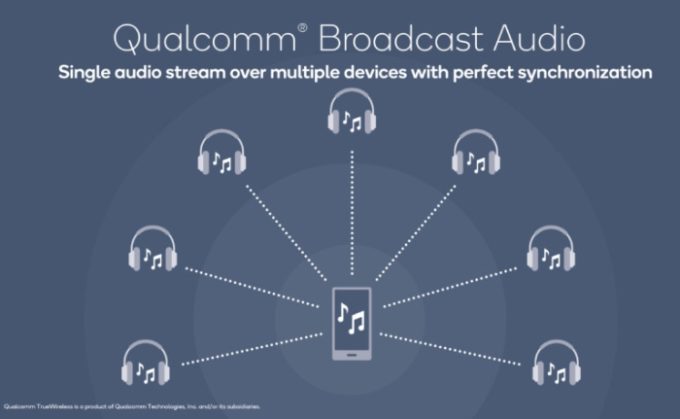 Multi-device streaming is actually one of the key new features of Bluetooth 5.0, so it’s not surprising that Qualcomm’s new chip can do it. But the company says its “Broadcast Audio” technology makes it easier to set up, pair, and manage devices.

The technology could be used to send audio to multiple speakers or headphones while keeping the playback in sync across those devices. It lets multiple people listen to the same song while using different headphones, for example, or creates multi-room audio if you’ve got multiple speakers within range. It could also come in handy for things like guided tours.

Qualcomm says its Broadcast Audio is baked into the Snapdragon 845 platform, which means it should be available on many upcoming flagship smartphones. But it’s also a feature of several new Qualcomm Bluetooth audio chips including the QCC5100, CSR8670, CRS8675, and CSRA68100.

That QCC5100 chip, by the way, is the company’s new processor aimed at truly wireless earbuds (the kind with no wires connecting the left and right earbuds).

According to Qualcomm, the chip uses up to 65 percent less power for voice calls or music streaming than its predecessor.

The chip maker actually unveiled the QCC5100 in January, but the company says it’ll be showing designs based on the platform at Mobile World Congress next week.