The new Pebble Time and Pebble Time Steel smartwatches have color displays and batteries that can run for a week or longer. But that’s not the only thing that separates them from the original Pebble Smartwatch.

Pebble also added a 4-pin connector to the back of the watch. You can use it to charge the battery… but the new connector also lets you connect a new type of accessory called a smartstrap.

These removable straps can add new functionality to the watch.

Some smartwatch makers have been cramming as many features as they could into their watches. Samsung and LG, for instance, have watches that can even make phone calls. But Pebble is taking a different approach by offering a more affordable watch that sells for $199 and up (although backers of the Pebble Time Kickstarter campaign can reserve one for $179), and which includes an expansion port.

Pebble could theoretically build some of its own smartstraps, but the company isn’t making any announcements on that front. Instead Pebble is hoping to spur development of third-party straps.

The company has already attracted software developers who have built a pretty robust ecosystem of third-party apps for its smartwatches. Pebble is hoping to do the same thing with hardware by allowing anyone to design a smartstrap. 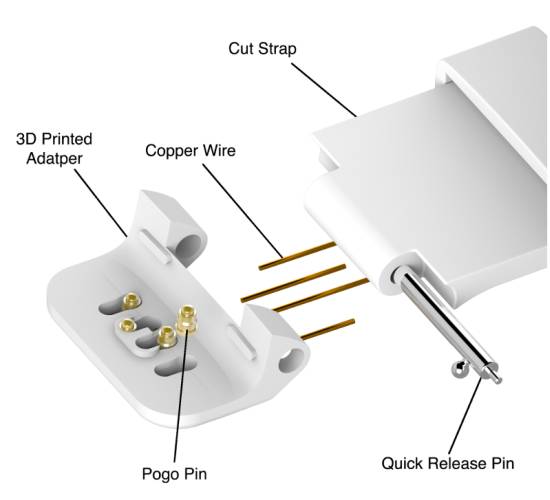 The company has released tools and information that developers can use to design their own straps that can be printed in a 3D printer. That could pave the way both for hardware startups to design and sell smartstraps, but also for hobbyists to make their own custom straps.

Keep in mind that straps that add new features may also draw more power, shortening the Pebble Time’s battery life. But since the straps are changeable, you can always remove a smartstrap when you don’t need the features it offers and add another one.

It looks like Pebble might effectively beat Blocks at bringing a modular smartwatch to market… although the Blocks team is planning a platform for watches that would support multiple modules simultaneously.