Pebble has been one of the leaders in the smartwatch space since the company introduced the original Pebble watch almost 3 years ago.

While Samsung, Google, Apple, and other companies have launched their own smartwatch platforms in the years since Pebble entered the wearable space, the company still has a loyal following thanks to features such as long battery life, support for Android and iOS phones, and a strong ecosystem with support for many third-party apps.

Now Pebble is introducing a new watch that’s thinner, more colorful, and still a lot cheaper than an Apple Watch. 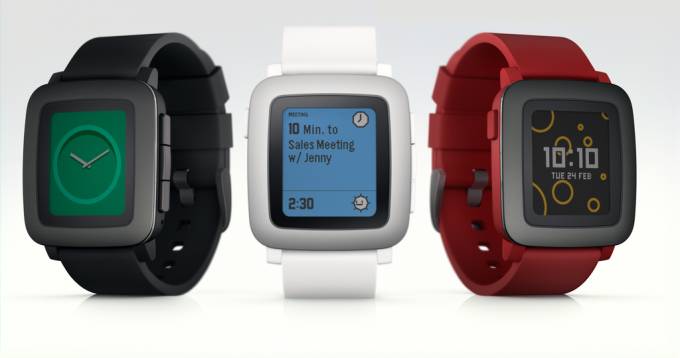 The Pebble Time is 20 percent thinner than the company’s earlier models and it introduces a color display (the original Pebble and Pebble Steel had grayscale displays).

The new watch also introduces a microphone which you can use to respond to notifications, a curved design which should make the Pebble Time more comfortable to wear on your wrist than earlier models.

Pebble says the watch features durable materials including a Gorilla Glass scratch-resistant screen, a stainless steel bezel, and a water-resistant design which can withstand rain or even a swim. The watch comes with a silicone band but it should support any 22mm watch band.

Update: There’s also a new connector that’s used both for charging, and for attaching Pebble smartstraps: wristbands which can add functionality to the watch.

At launch the Pebble Time will be available in three colors:

But what really makes this model stand out from earlier Pebble smartwatches is the color screen.

One of the things that made the original Pebble smartwatch and the Pebble Steel different from other smartwatches was the low-power, sunlight visible grayscale ePaper display which allowed the watches to get up to 7 days of battery life without the display ever going dark to save power.

The new Pebble Time also has an ePaper display and up to 7 days of battery life. But the new model has a screen with support for 64 colors, which enables new apps and features.

Sure, the screen isn’t as bright and the colors aren’t as vivid as what you’d get with an Apple Watch, Samsung Gear 2, or Motorola Moto 360. But the week-long battery life is a pretty good consolation prize.

The watch features Bluetooth 4.0 Low Energy for connecting to phones running Android 4.0 or later or iOS 8 or later in order to display notifications. There’s a vibration motor for alarms and support for step tracking.

In addition to running apps designed for earlier Pebble smartwatches, the new model has a new app menu and a new feature called Timeline which shows upcoming appointments and other information (this will be rolling out to the original Pebble and Pebble Steel in the future).

The Pebble Time also supports new types of apps thanks to new hardware including the color screen and microphone. Pebble plans to launch new developer tools later this year for creating apps that will take advantage of those features.

Pebble hopes to begin shipping the Pebble Time in May, 2015. It has a retail price of $199, but the company is kicking things off with a Kickstarter campaign, where early backers can reserve one for $159 (or $179, depending on how quickly they act).